Testosterone is a steroid formed by the interstitial cells of Leydig. Leydig cells are almost non-existent in the testes during childhood, but they are numerous in the newborn male infant and also in the adult male after puberty, at both these times the testes secrete large quantities of testosterone.

Functions of testosterone during fetal development 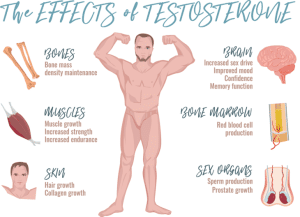 Functions of testosterone at puberty

Testosterone is responsible for the initiation and maintenance of body changes associated with puberty in man.

Hair growth: the body hair increases particularly in the face (so the beard and moustache appears), chest, limbs axillae, and around the anus The pubic hair grows in the form of a triangle with its apex up However, the scalp hair falls with the bilateral temporal recession of the frontal scalp hairline, and boldness is accelerated.

Voice changes: it causes hypertrophy of the laryngeal mucosa and enlargement of the larynx. The vocal cords increase in length and thickness so the voice becomes deeper.

Changes in the body conformation: the shoulders broaden and the muscles enlarge due to the anabolic effect of testosterone.

Near the age of puberty, the cell bodies of neurons of arcuate nuclei of the hypothalamus begin to secrete gonadotropin-releasing hormone (GnRH), widely known as LH-releasing hormone into the hypothalamic-hypophysial portal vascular system. This hormone in turn stimulates the anterior pituitary gland to secrete gonadotropic hormones: luteinizing hormone (LH) and follicle-stimulating hormone (FSH). In turn, LH is the primary stimulus for the secretion of testosterone by the testes, and FSH mainly stimulates spermatogenesis.

The anterior pituitary gland secretes gonadotrophic hormones: FSH & LH hormone luteinizing hormone (LH). These are glycoprotein hormones. In adult, luteinizing hormone, in turn, stimulates hyperplasia of the Leydig cells of the testes and also stimulates the production of testosterone by these cells and FSH stimulates spermatogenesis.

During pregnancy, the placenta secretes large quantities of human chorionic gonadotropin, a hormone that has almost the same properties as LH. This hormone stimulates the formation of Leydig cells in the testes of the fetus and causes testosterone secretion

The secreted testosterone feeds back negatively to the hypothalamus inhibiting the production of GnRH that in tum decreases LH and FSH secretion from the anterior pituitary.

Puberty and regulation of its onset

During childhood, the hypothalamus does not secrete a significant amount of gonadotropin-releasing hormone and consequently, almost no testosterone is secreted. This may be due to that the slightest secretion of sex steroid hormones exerts a strong inhibitory effect on hypothalamic secretion. Yet, for reasons still not understood, at the time of puberty, the secretion of hypothalamic GnRH breaks through childhood inhibition and adult sexual life begins.

It means decrease secretion of male sex hormones. Hypogonadism is caused by:

When a boy loses his testes before puberty:

When a man is castrated following puberty:

It occurs if there is a tumor in the interstitial Leydig cell. It secretes large quantities of testosterone. When such tumors develop in young children, they cause: