The distance is a scalar quantity, while displacement is a vector quantity because the distance is determined by magnitude only, while displacement is determined by magnitude and direction, The direction of the wind affects the velocity of the plane and hence the time of the trip and therefore the amount of fuel consumed increases. 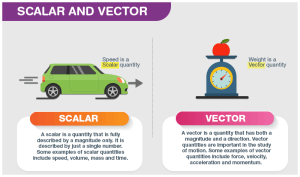 Acceleration and force are vector physical quantities because they have magnitude and direction. All vectors are subject to operations called vectors algebra. Vectors have great importance in different fields of physics, applied sciences like engineering. Understanding various physical phenomena such as gravity, movement of liquids and geometrical establishments depends basically on the main properties of vectors.

The difference between some similar physical quantities

There are some physical quantities that seem at first sight to be similar, but they have a great difference in their concept such as:

Example 1: When a car moves from position (A) to position (B). The length of the curved line gives the distance covered by the car. The straight line that starts from point (A) and ends at point (B) in the direction AB gives the displacement of the car. (The shortest length between (A) and (B) in direction AB [in the Eastward direction].

Example 2: A person wants to make a trip by his car from Caire (starting point to Tania (endpoint). The distance of the trip depends on the path that the car takes til may take place in two ways. If the trip path is:

You notice the difference in the distance between Cairo and Tanta (although the two cities remain constant), this difference in distance depends on the trip path. The shortest straight line that starts from Cairo and ends at Tanta represents the displacement of Tanta from Cairo which does not change. i.e. The displacement= 93 km in the Northern west direction “Vector quantity“.

The two equal displacements must have the same magnitude and the same direction. The direction is determined from the starting point of the movement towards the final point.

When the amount of the displacement happened is less than the distance covered, so, the object moves in a curved path (or any path doesn’t represent a straight line). When the displacement of 2 different objects is equal. so, they have the same magnitude and move in the same direction.

A rubber ball fell downward from a height equal 2 metres from the ground, then returned upward 1 metre, then fell down again to rest on the ground. Calculate distance and displacement.

Average speed is the total distance covered by the object in one second (a unit time). Speed can be identified by its magnitude only. It is a scalar physical quantity.

The velocity is the speed in a given direction (When the body moves in a straight line in one direction). Velocity is a vector physical quantity and to determine it accurately, it is necessary to identify its magnitude and direction.

A body covered 30 metres northward within 30 seconds, then 40 metres eastward within 20 seconds and stopped at a point about 50 metres from the starting point. Calculate:

Importance of wind velocity for flights

When the plane takes off in the same direction of wind from city (1) northeast direction to city (2). The value of its velocity increases, so, the time of the trip decreases, and therefore the amount of fuel consumed decreases

When the plane takes off in the opposite direction of wind from city (2) southwest direction to city (1). The value of its velocity decreases due to the resistance of the wind to the movement of the plane, so the time of the trip increases, and therefore the amount of fuel consumed increases.