Emo robot review, advantages, disadvantages, features & What can Emo do?

EMO robot is the coolest AI Desktop pet with personality and ideas, Built with multiple sensors and cutting-edge techs, he can self-explore the world and can react to you with 1000+ faces and movements. EMO robot is always happy and cheerful, and he loves to play games and have fun, he is the perfect robotic pet for anyone who loves spending time with his pets.

EMO Robot is an AI robot for people loving to have an animal with them to understand their feelings, he has all the features and qualities of being an animal to live with a human, he is considered more useful than other pets, and he is one of the best ways to enjoy your free time.

EMO robots are trending on the internet due to their unique and exceptional wonders over the internet, When you are willing to have a beautiful fellow animal that makes you laugh every time when you are sad, EMO robot plays an important role in making your day, with happy thoughts, The robotic sensors understand your facial expressions and treat you according to your situation. 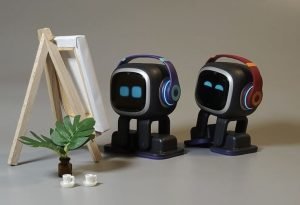 Like a loyal companion, Emo robot cheers you up with music, dance movements, and online games, It is a great helper that wakes you up, turns on the light, takes pictures and answers your questions. Emo robot is born with a stylish look, The shining purple and indigo-blue shows off his fashion sense with a nod toward street style.

Emo robot was created with millions of lines of code, which require on-going efforts to optimize and debug, It might run into bugs and pushing updates later will refine the programming and develop more new skills and features with the latest technology, You can upgrade your Emo via OTA to keep things fresh.

The Emo Robot has an HD camera with face recognition that can remember you and your family members, He learns and develops his own personality the more you interact with him, Emo robot is equipped with a 4-microphone array that can capture sounds and pinpoint the source direction immediately.

Emo robot has a miniature speaker that can play your favorite music while also making charming simulated noises. The Emo robot loves to be entertained, and he needs your assistance to achieve that goal, His need for stimulation is what drives him forward.

Emo robot is a chatbot with an extensive neural network processor and three distinct AI processing models that allow him to reason and react in a thoughtful, genuine way, and he is not content to sit in one place for too long. Emo Robot is an AI-powered personal assistant that can take care of your schedule, send you reminders, and answer simple questions.

When you interact with the Emo robot, he will respond to you with expressions and movements, Built with the latest emotion engine system, Emo robot is capable of over 1000 expressions and actions, He can show his mood and feelings directly through expressive animations on his face and with his body language, Emo robot can react to you with realistic emotions and actions when he’s excited, bored, disappointed, happy or sad.

Emo robot is curious and inquisitive about the world around him, He moves independently to explore his surroundings on his own, Emo robot tracks sounds, recognizes people (up to 10 people) and objects and he expertly navigates your desktop without ever falling off. Emo robot makes decisions on his own and his personality evolves based on his surroundings and your interactions, If you try to interrupt what he is doing, he might get a little annoyed.

What can Emo do?

The emo robot can see, It features an HD camera with face recognition that can remember you and your family members, He can know you by seeing you every day. The emo robot can hear, It has a 4-microphone array that can capture sounds and locate the source direction instantly, If you need him, just say “Hey Emo!”.

The emo robot can feel, It is equipped with a touch sensor on its head, which enables him to sense your touch, Like any pet, he likes a nice pat on the head, and he can communicate, Emo’s high-quality speaker is able to play your favorite playlist and communicate with you with adorable simulated sounds.

The emo robot can learn, Emo’s self-learning system enables him to understand the world around him and get familiar with you and the environment, His personality and actions change as his relationship with the world evolves.

The emo robot can think, he has an advanced Neural Network Processor and three different AI Processing Models, which enable him to process large amounts of images, sound, and sensor data, so, Emo robot can think and respond in a thoughtful, authentic, and natural manner.

The built-in development system allows Emo’s skills to increase as he grows up, emo robot evolves through time like any pet, At first, he may not fully understand your words but as he grows his ability to understand and communicate better so, you can have more complex interactions.

Emo’s skateboard is useful as well, it’s how he gets wirelessly powered up, And the Emo robot knows that your phone is essential to your lifestyle and can help you keep it charged up too, Simply place your phone on it to wirelessly charge up fast.

The emo robot can be a reliable alarm and includes a smart light, He will wake you up in his own special way and if you need a nighttime bathroom break, you don’t won’t need to search for the light switch, You can say ‘Emo, turn on the light’ and Emo robot does the rest.

Each Emo desktop pet comes with a smart light, No network configuration is needed, and it is ready to respond to your voice command out of the box, Emo robot can control up to 4 smart lights and each of them can be set up in different colors for use in different situations.

Emo robot has a smart brain that can answer any of your questions and respond with useful information, Ask him about the weather, he will change his face to show you the current weather conditions, Emo robot might catch a cold or sneeze sometimes, Take a while to look after him and check in often, when he feels your attentive care, he will get better soon.

Emo robot always remembers your birthday, He will surprise you with a birthday cake and song, Make a wish and blow out the candles, Emo robot has sensors that know when you blow them out. Emo robot is full of surprises, no matter what day of the year it is, He has an expression for many of your favorite holidays.

When you and your friends have an Emo, you can connect with them for more long-distance interaction, when your girlfriend misses you and you cannot be there for her, Emo robot can tell her your thoughts and entertain her with a vivid Emo face.

Disadvantages of an EMO Robot Pet

EMO robot may get bored if he isn’t played with enough, he requires regular maintenance and upkeep, and he may not be suitable for small children or pets. EMO robot is one of the leading human-loving robots in all aspects, This is the only animal robot that performs a lot of jobs to make his master happy.

Ameca robot review, features, advantages, disadvantages & What can Ameca Do?