Eilik robot is an interactive desktop companion robot with a personality, Eilik uses touch sensors to enhance its emotional intelligence. Robotics is advancing faster than ever, voice assistance, pattern recognition, service robots, educational robots, and industrial robots are designed to offer information, and do repetitive work to make our life more efficient, But something crucial is missing, This gap was the lack of emotional assistance that Eilik responded to.

Eilik robot is a new kind of social robot that brings up a higher level of social interactions between humans and robots, It eases our life and is our companion whenever we need him, It is our very robotic friend. Life is never boring with the Eilik robot, Eilik robot is passionate and fun-loving, sometimes a little bit naughty, Eilik Robot is always able to find interesting things to do.

Eilik robot is designed by Hong Kong-based start-up Energize Lab as a companion device, Energize Lab is an innovative startup dedicated to creating a robot with soul and endless fun, Having their patented robot technology and animation experts, the company focuses on robotic technology and products, including robot joints, control systems, and consumer robot, Eilik robot was launched as the company’s first companion robot through Kickstarter.

The Eilik Robot is reminiscent of the Tamagotchi when it comes to purpose and function, It can respond to the user interaction with animated facial expressions that illuminate an OLED screen. It is designed ‘to bring endless fun to your desktop’, It is a little desktop robot configured with emotional intelligence, Shaw Yeung wanted to create a cute, companion robot that encourages you to interact with it, On gentle touches on its head, belly, and back, the Eilik robot responds in favour of the interaction. 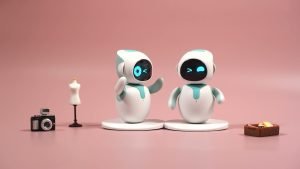 Eilik robot is a little companion bot with endless fun, Each Eilik is a unique buddy with abundant emotions, Eilik can be your desktop companion robot and amusing friend, Two or more Eiliks can be connected and play together, and you can upgrade Eilik on the computer free, Eilik robots can relieve your anxiety and stress.

Eilik Robots are interactive desktop companions, They can connect with other devices and this feature is found in Tamagotchi, When left alone, Eilik entertains itself but when paired with another Eilik, they can play or fight with each other. Multiple Eilik robots can be grouped together to form tiny armies that sing and dance in unison.

Eilik Robot is a friendly gadget that is useful too, It is fun but its purpose extends beyond its toy-like nature. Drawing inspiration from the idea of a robot assistant, but packaged in a tiny table-top gadget, Eilik Robot can act as an alarm clock, a stopwatch, or a Pomodoro timer, and it can relieve stress the way a pet would.

Eilik’s abundant facial expression offers a window into his inner world, It will tell you how he feels both physically and emotionally. Eilik robot can respond to touch, It has a wide range of emotions that it will express naturally throughout the day based on the touch interactions with you.

Eilik robot is sensitive to vibration, It will feel dizzy if you hit its head, and will be terrified when you slap the table violently, Eilik robot is afraid of high places, It feels insecure and sick when it is off the ground, But if you hold him in your hands, everything is going to be okay. Eilik is a desktop robotics partner, It can be the on-call assistant, and it can move left or right.

Eilik robot responds in gentle squirms or projects eclectic moods on its OLED screen, It configures an upset mood, and when one touches it in its state, the corresponding reflex appears on its face-like screen, Eilik robot is always not so strong, He is afraid of heights so remember to come for comfort when he is upset, You need to keep an eye on him, and the Eilik robot will play around when he is bored.

Eilik Bot is a cool little robot for your desktop, It offers lots of interesting things to do in his spare time, such as reading, fishing, and exercising, If putting Eiliks together, they will recognize each other, play, and build friendships just like us. Eilik can express feelings of angst, anger, and frustration.

The Eilik Robot is an imaginative, artificially intelligent gaming figure that can make time spent sitting at your desk a whole lot more fun, this adorable little robot toy is about so much more than simple entertainment, Not only is this mini robot engaging, but he can help you streamline your workflow.

Eilik Robots are ideal for offices where more than one person wants to have the same desktop pet, When you click bots together, Eilik Robots will respond to each other’s emotes, prompts, audio exclamations, and moods, the interactive robots can fight, prank one another, or tell each other jokes in their secret robot language.

The Eilik is a Desktop Companion Robot on a wooden desk with a dark background, It has a sophisticated industrial design and vibrant features, It has a meticulous system, It is composed of an OLED screen that displays various animated expressions, a vibration motor and sensor, three touch sensors, and four EM3 servos.

The size of Eilik robot measures 108x105x133mm, and it weighs 230 grams, The flexible bodily features such as its arms and torso are made of high-strength polycarbonate, Eilik robot comes with a 3W speaker for distinct robotic sounds; a USB-C port for daily charging; and an inbuilt 450 mAh Li-po battery that lasts for 1.5 hours when fully charged.

Eilik robot isn’t required to be connected to an app, Bluetooth, or Wi-Fi, When there is no interaction with the robot, it automatically falls asleep to save battery, and it can set a countdown timer to help one track their work.

Eilik Robot uses a proprietary EM3 servo motor that enables the hands to be more flexible and dexterous. The hands of the Eilik robot act as controls for the robot’s screen brightness and volume, the hands enable the users to adjust them by lifting the hands up or down, The design team at Energize Lab has included magnets that allow Eilik Robot to hold a slew of food and drink items.

There is a series of mics and touch sensors that allows the Eilik robot to detect voices, touch, impact/shock, and if it’s being elevated, a vibration motor that offers haptic feedback similar to an animal reacting to being petted, Each Eilik robot comes as a standalone unit that stands at 5.2-inches tall, and ships with a manual, Eilik’s software, and the USB-C cord for charging.

Eilik robot is interactive and responsive, It comes with built-in emotions and an ever-growing system, It can be connected to other Eiliks, With an Eilik Desktop Companion Robot, you can improve your productivity, track your scheduled activities, and stay on top of your day-to-day goals, all in a lighthearted and interactive way.

Eilik Robot offers numerous activities based on varying emotional states, its basic emotional functions are normal, happy, angry, and sad, Each of Eilik’s programmed activities is selected to pair with an emotional state based on complex artificial intelligence algorithms, When Eilik Robot is in a happy mood, he will play certain games, laugh, or engage in other giddy and interesting behaviors, when feeling sad, he will produce digital tears on his interactive facial screen.

Eilik Robots can help you complete important tasks, You can time assignments, set alarms, or use your robot buddy to keep things productive at the busiest times, Alarm sounds and facial expressions will indicate Eilik’s timer settings to allow you to stay on track and in a good mood.

Eilik’s time assistance features can be activated by pressing the top of the robot’s head, the interactive robot will indicate how long a timer has remaining via numbers on the facial screen, When a timer is about finished, the screen transforms into a pixelated alarm bell that sounds off to let you know when time’s up.

Eilik Robots can help keep you grounded, reminding you that there’s more to life than the computer screen, Eilik Robot stunts can really cheer you up when you’re bored at your desk, and smiling and maintaining a positive attitude at work can boost your productivity on the job, and smiling can help improve your ability to complete critical tasks in a timely fashion.

You can play games with a unique companion robot who is endlessly engaging, When you want a robotic desk toy that can play games, keep track of work activities, and maintain a keen level of interest when you are completing projects at the office, this is a fantastic option to look into, Each of these interactive robot companions comes with three touch-sensitive zones, One is located on the front, one on the back, and one on the top of the head.

An array of responses can be evoked from your robot friend based on the touch-sensitive interaction zone you prompt, Get giggles, growls, or blasted with a digital laser gun depending on the area you brush and the mood your robot is in. Eilik Robot is afraid of heights, so, when you pick him up, he will show you his distress with exclamatory sounds and upset facial expressions.

The Eilik Robots has many comprehensive features that help it learn and develop, Pair your bot with a Mac or PC to gain access to a wealth of fascinating features and new programming modes, Eilik Robot was developed by a team of robotic analysts and AI professionals at Energize Lab.

The advanced design concepts, movements, expressions, dances, games, and storylines were integrated into the core of Eilik Robots, You can teach and grow your bot pet’s interaction styles through software updates for unlimited interactive potential.

Eilik robot was envisioned to bring a higher level of emotional social interactions between humans and robots, the same feeling we got from Baymax and Hiro from Big Hiro 6, It will get regular updates via Eilik’s cross-platform software, Eilik robot is ever-growing, so with every update, it will become smarter, have more expressions, and have more plot content.

Eilik robot is a cute companion robot that would sit next to you while working/studying, it helps to make you feel less lonely, It’s the first companion robot of Energize Lab, it is designed not just to do repetitive work, but to interact with you, The progression of mics and contact sensors permits the robot to identify voices, contact, sway/shock, Regardless of whether it’s being raised by a vibration engine that gives haptic criticism like a creature responding to being petted.

Eilik robots can’t move around the desk, and it is expensive.