Ameca robot review, features, advantages, disadvantages & What can Ameca Do?

Ameca humanoid robot is manufactured by Engineered Arts, Ameca has a human-like face and body, It is able to make different facial expressions, which is ideal for customer interaction, It is powered to connect with visitors, From answering questions and providing directions to greeting them.

Ameca robot is the most advanced human-shaped robot representing the forefront of human-robotics technology. Ameca robot is designed specifically as a platform for development into future robotics technologies, It is the perfect humanoid robot platform for human-robot interaction. Human-like artificial intelligence needs a human-like artificial body.

Ameca robot is a robotic humanoid created in 2021, The first generation of Ameca was developed at Engineered Arts headquarters in Falmouth, Cornwall UK, The project started in February 2021 with the first video revealed publicly on Dec 1st 2021, Artificial intelligence and machine learning systems can be tested and developed on Ameca alongside the powerful Tritium robot operating system.

Automotive Manufacturers Equipment Compliance Agency, Inc. (AMECA) is the agent for many states of the United States to provide safety equipment compliance services, The AMECA program is the only program of its type in the United States. This Equipment Compliance Program is centralized, one-stop, and notifies the government, industry and the general public about compliant motor vehicle safety equipment. 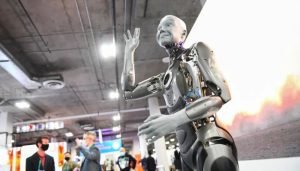 The Ameca hardware is a development based on research of humanoid robotics and it is built on advanced Mesmer technology. Ameca robot is a great attraction, It is known to be the most advanced humanoid robot in the world, It is available for purchase or event rental. Ameca exhibited at CES 2022, which was held in January 2022.

Ameca is designed as a platform for further developing robotics technologies involving human-robot interaction, It uses embedded microphones, binocular eye-mounted cameras, a chest camera, and facial recognition software to interact with the public, Interactions can be governed by either GPT-3 or human telepresence, Ameca features articulated motorized arms, fingers, neck and facial features.

Ameca robot has grey and translucent rubber skin on the face and hands, and robotic limbs, made of metal and plastic, it is designed to appear genderless. It can emulate human expressions quite well, and it can answer all questions articulately.

Ameca robot has a human-like artificial body, Smooth, lifelike motion and advanced facial expression capabilities, so Ameca robot can strike an instant rapport with anybody, Ameca is the perfect platform to develop the interaction between humans and any metaverse or digital realm. Ameca looks like a real human, It can perform various human facial expressions including winking, pursing the lips, and frowning the nose.

The Ameca robot can work with humans and offer relatable natural human gestures, It is designed with upgradeable modular mechanics and can be controlled via a cloud-managed API dev kit, API of Engineered Arts offers customization pathways that weren’t available previously. Ameca robot has ground-breaking advances in movement and natural gestures, intelligent interaction, and offers future-proof software systems.

Ameca Humanoid Robot puts AI in a Gender-Neutral, Ameca robot is cloud-connected, so, if something goes wrong, engineers can remotely connect to it to diagnose problems, and problems can be fixed remotely.

Ameca robot is designed to be non-threatening and generally neutral, It is designed to support the testing and development of artificial intelligence and machine learning systems alongside the company’s Tritium robot operating system, The actual robot hardware stems from the company’s Mesmer technology, which was developed to display a vast range of human emotions, Mesmer robots were designed using 3D scans of real people that allows them to imitate human bone structure, skin texture, and expressions.

Ameca robot flexes its arms and shows amazement at how its hands and fingers move as it stares at the camera, Ameca remains immobile because it is supposed to give help more flexibly and intelligently. Modifications to both software and hardware components may be made without buying a new robot.

Ameca robot includes a camera in each of its eyes, allowing it to recognize people, follow their faces, and detect things like when the finger is placed in front of its face, Ameca’s movements can move its hand to the side of its head, and its shoulder movements are identical to those of humans.

Ameca robot smiles weirdly at the camera, It is the best platform for human-robot interaction because it is designed to develop future robotics technologies. It can open its eyes blinking in complete surprise and look in every direction to find the source of its awakening is very relatable, Ameca robot can look at its arm to inspect and test it as if it became alive.

Ameca robot has a lot to offer, It can show facial emotions, It can be easily enhanced because it is modular, Depending on the company, each module may function independently, so you don’t need a fully assembled robot and can merely use its head or even a single arm, Because a completely working robot has yet to be developed, the robot is currently unable to walk; nevertheless, development into a walking robot will continue.

Ameca feels friendly, you’d allow your kids to play with it. The Ameca robot system was designed to be cloud-connected, which provides owners or operators with access to all robot data, and allows it to be controlled from anywhere in the world, Ameca’s hardware presents lifelike motion and advanced facial expression capability.

Ameca robot achieves exactly that balanced sweet spot making it perfect for interacting with superb non-verbal communication, Robots like this could fulfill customer support positions, or help autistic children, among many other uses.

Ameca’s grin, ability to blink often, gasp in surprise, scratch its nose, and play a staring contest with its owner for enjoyment, among other high-tech capabilities, is incredible. Ameca robot represents an advancement in teaching nonverbal communication to humanoids to improve their engagement, Ameca robots can be effective in aiding older children.

Ameca robot looks human, but it’s extremely dumb, Unlike AlphaZero or GPT-3, it was not built to display intelligence, either narrow or general, It comes with very limited language functions, which contrasts with the Sophia robot that went viral a few years ago when it became the first to have legal citizenship.

While the robot is humanoid, it’s not able to walk, You won’t find Ameca jumping around like Boston Dynamic’s Atlas. Ameca robot isn’t the smartest, It isn’t the most helpful or skillful, It can’t have an engaging conversation or even move.