Siri is an intelligent voice assistant that allows the users to use their voice to send text messages, schedule meetings, make phone calls, and more, Siri comes with many functions, It can activate the low power mode, or enable do not disturb mode (DND), Siri can answer your questions, send emails, It can set up an alarm, make a reservation at your favorite restaurant, It can get you directions to a place you are going, and more.

When you use an iPhone or iPad or some other Apple’s devices, you can get many things done faster & more convenient using Siri, Setting up Siri is very simple, Siri integrates with OpenTable, You can get recommendations, Siri can understand natural language and infer information you need, Ask for local restaurants and relevant information from the Internet will be relayed.

Siri is very easy to use, The user speaks naturally, memorized commands are not necessary, Siri learns the user’s preferences over time, You need to be connected to a Wi-Fi or cellular network, If you haven’t set it up just yet, go to Settings > Siri, and turn it on, You can activate Siri with a home button, Else, you can enable “Hey Siri”, and you can bring up Siri by commanding “Hey Siri”, Then, ask anything you want to, and Siri will come up with answers.

You can use Siri on all Apple’s devices, Siri is not available only for iPhone, iPad, and iPod touch, You can use Siri on Apple Watch, Apple TV (4th generation), and your Mac, It can do many things on all these devices as well, You can ask Siri how much free space you have on your computer, to find files on your Mac, to search the web, and more. 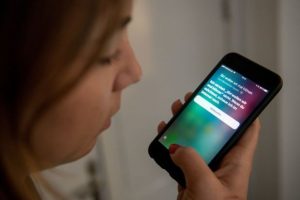 Siri comes with Non-English language options, Out of the box, Siri’s language is English, But, if you are not fluent in English, or you want to practice a language you are currently learning, Siri can help you, The first thing you need to do is change it from English to another option, You can do that by going to Settings > Siri > Language, and then choose a language you want from the list.

Siri is an artificial intelligence designed to help iPhone users with their daily tasks, It can perform tasks such as adjusting the user’s calendar on the fly, You can make appointments, Siri is better in terms of communication, Siri works with both iMessage and email, Simply dictate your message using speech-to-text, You can call or text anyone with another Alexa device as well as call anyone in your contacts.

The user of the iPhone can send commands to iPhone via voice and iPhone can translate that voice command, If you’re a non-English speaker or you want to practice the language that you are learning, Siri is the best friend you will have, you can change the language preference of Siri in its setting, Siri can be set to work with 21 languages with localization for 36 different countries, You can also use it to translate phrases from English to other languages.

Siri is a voice command app, It is used for making life easier for people who are too lazy or busy to type, you can ask Siri to post statuses or tweets to Facebook or Twitter by saying, “Post to [Twitter or Facebook]” and then dictating your post, You can make a phone call, You can ask Siri to dial a number for you by the name of the person in your contact list, You can ask it to initiate a FaceTime video call.

Siri can look up nearly information available on the Internet, including movie listings, store phone numbers, and the local weather, You can get directions, Siri would direct you to the Maps app and offer the suitable driving directions, Siri can act as a GPS, It can book your evening out for you with the help of certain apps, and you can give Siri a basic command to create calendar events.

You can ask Siri to play reminders for you, set timers and alarms, You can play music, Siri integrates with Apple Music so rather than searching for a song, you can tell Siri what to play and it will respond, Siri can handle playing media via AirPlay, but it can’t control the device such as turning it on, Siri integrates with third-party services, which can be linked to thousands of third-party apps.

Siri is one of the best intelligent voice assistants, Siri can open any app on your iPhone by request, You can manage your smart home, It can integrate with HomeKit-enabled accessories to turn on lights, It can change the temperature and work your security system, It can send money to anyone in your contact list, You can send a payment, Using the Apple Pay app.

Using of Siri For Learning

Although Siri is not specifically an educational program, Siri could soon come to play a big part in the classroom, Siri is used in record-keeping, Teachers have to maintain much documentation of their kids, and many have streamlined the process of note-taking and documenting conferences with students and parents by using Siri.

Siri is used in calling & emailing, teachers don’t have to lose their place in grade books and exams when they come across the need to call or email a parent or a colleague about a troubled student or an upcoming meeting, Siri is used in problem-solving, school kids can keep track of homework, projects, and tests, older students in high school and college use Siri for taking notes & transcribing lectures.

Siri can be a mathematical wizard, It can solve simple equations and more complex problems, It can open apps by voice command, It can save time, It would be difficult for a student to use voice recognition software to cheat on a test in a small, quiet classroom, The teachers that are using Siri should be creative with the software, restricting questions to only ones Siri can’t answer.

Siri can’t work without an active internet connection, This is one of the biggest drawbacks of this voice assistant, Siri depends on cloud computing, So, you can’t use it when you are offline, because all voice commands are relayed through Apple’s servers before returning to the phone, Siri can’t work very well if you end up in an area with weak cellular service.

The maps were only translated in English so, you have to speak in English else it will not find maps, voice commands may not be interpreted by iPhone as you speak, It doesn’t understand many languages such as Scottish, looking up other information sometimes defaults to restaurants & locations, Search is based on the words used, if the word is not in the description then Siri can’t find it.

Siri works well, but you should speak clearly in order for Siri to understand you & do what you want, If you speak too fast, or with a strong accent, Siri won’t understand you, There are listening problems with Siri’s ability to understand your queries, Siri has trouble with background noise and low-quality audio from some headsets, Siri needs Wi-Fi If you’re on a patchy connection or your 3G goes down.

All iPhones have a special silent mode that disables common sounds like ringtones, text alerts and notification pings, Siri ignores silent mode, It will always be audible, If you need your phone to be absolutely silent, you can’t use Siri until your phone makes noise again, Siri features built-in support for several languages, The AI speaks English, French, and German fluently, However, Siri’s navigational capabilities are limited to English, It can only find directions in English.

Siri doesn’t understand all spelling variations, There are multiple ways of giving the same commands due to variations in human languages, Siri’s learning skills aside, Siri can’t yet compound all its actions with most apps, Siri can search for something on the web, or open the App Store for you, but it can’t search for something in the App Store.

If you have “Raise to Speak” set in Siri’s settings, it doesn’t always activate when you raise your phone to your ear, You might still have to hold down the Home button unless you discover the magic motion combination that always makes this feature work.

There is also one security issue with Siri, but it’s easily fixable, Even if your phone is password protected, you can invoke Siri with the Home button, And in this state, it can be used to send messages and make calls to people in your contacts list without unlocking your phone, Unlike with many GPS devices, you can’t pick and choose Siri’s voice.