The lens is the transparent medium that refracts the light and it is limited to two spherical surfaces, The lens is usually made of glass or plastic, The lens is a transparent optical device that affects the focus of a light beam through refraction.

The lenses are made from transparent materials such as glass, then ground and polished to the desired shape, The lens can focus the light to form an image, unlike a prism, which refracts the light without focusing.

The devices that similarly refract radiation other than visible light are also called the lenses such as microwave lenses electron lenses, explosive lenses, or acoustic lenses. 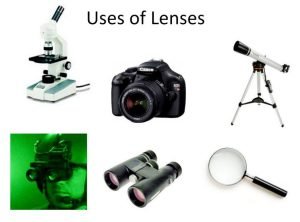 Types and uses of lenses in our life

The person who fixes the watches uses a magnifier lens to see the minute parts of the watches, The lenses are used in the manufacture of many things as projectors, cameras, and magnifying lenses.

The lenses are used in Microscopes which are used to form magnified images of tiny bodies that can not be seen with the naked eye and they are used in making medical glasses to treat vision defects such as myopia and hypermetropia.

When one of the surfaces is flat, the lens is plano-convex or plano-concave depending on the curvature of the other surface, The lens with one convex and one concave side is convex-concave or meniscus, this type of lens is most commonly used in corrective lenses.

Cylindrical Lenses have a curvature along only one axis, they convert laser diode elliptical light into a round beam or focus light into a line, such as motion picture anamorphic lenses. Fresnel lens is a lens whose optical surface is divided into narrow rings, This allows the lens to be much thinner and lighter than conventional lenses. Lenticular lenses are a group of microlenses that are used in lenticular printing, They produce images that have an illusion of depth.

Lenses are classified into two types according to the shape and purpose of the lens, Concave lens and Convex lens, The convex lens is thick at the center and has less thickness at the tips, It collects the light rays falling on it, So, it is called the converging lens. The concave lens is thin at its center and thicker at the tips, It separates the light rays, So, it is called the diverging lens.

The concave lens always generates a virtual image, It can never form a real image, The image is formed on the same side of the lens as the object, thus can be seen in the lens only and cannot be formed in a screen and as the distance of the object from the optical centre increases the size of the image decreases.

Special concepts related to the lenses

The focus of the lens (F) (the principal focus) is the point of collection of the refracted light rays (in the convex lens) or their extensions (in the concave lens), It is produced when a beam of parallel rays falls parallel to the principal axis of a lens.

Properties of the formed images by convex lens and concave lens

The uses of lenses to treat the vision defects