The joints and their significance to the movement

The bones act as the levers that can be moved by the skeletal muscle to which they are attached, The human skeleton is made up of differently shaped bones that align with each other, The point where the bones align is called a joint. 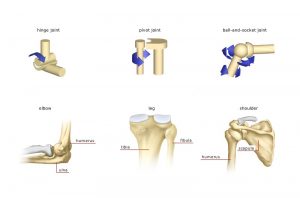 The joints provide the mechanism that allows the body to move, They allow the movement to occur, so that we can sit, walk, run, ……………..etc, The joint moves when the muscles crossing it contract, It facilitates the motion and allows the flexibility.

The types of joints

The immovable joints do not allow any movement such as the joints between the bones of the skull.

The slightly movable joints allow the movement in one direction only such as the knee and elbow joints.

The freely movable joints allow the movement in all the directions such as the shoulder, the wrist and the thigh (hip) joints.

The bones that in contact with these joints are covered with a delicate layer of a transparent smooth cartilaginous substance which allows the movement of the bones easily with less friction, They contain a synovial fluid which facilitates the sliding of the cartilages that cover the tips of the bones.

How can you maintain your locomotory system?