Structure of the human respiratory system 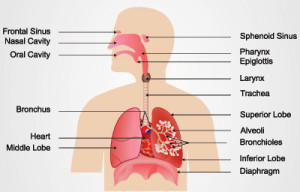 The nose is very important in our respiratory system as it is the first part of the respiratory system, through it the air enters the body, and it is lined with the mucus layer and hairs to filter the air from the dust and the microbes before entering the lungs.

The function of the nose is very important as it is lined with the blood capillaries to warm the air before entering the lungs, so, we should breathe through the nose and not through the mouth.

The pharynx is important as it is connected to the esophagus, so it is a common cavity between the digestive system and the respiratory system.

The structure of the trachea and the larynx

The trachea is very important in the respiratory system as it is a cartilaginous tube that is existed in the thoracic cavity, you should know that there are the larynx and the epiglottis at the top of the trachea, The larynx (the voice box) is very important in our respiratory system as it contains the two vocal cords which vibrate to produce the sound.

The epiglottis lies at the top of the larynx, and it closes the larynx or the trachea during the swallowing to prevent the food from entering the trachea, The bottom of the trachea is branched into two narrow tubes called (bronchi) which enter the two lungs (one bronchus in each lung).

The trachea is lined with the cilia to eject strange objects, It is supported by incomplete cartilaginous rings to be permanently opened for breathing.

The two lungs occupy the thoracic cavity, they are surrounded by ribs (rib cage) and they have air sacs (the alveoli) in which gases exchange takes place, The walls of the alveoli, and the blood capillaries are very thin to permit the exchange of gases.

The lungs are very important in the respiratory system, Each lung contains a bronchus which is divided into bronchioles, The bronchioles end in tiny air sacs called the alveoli that are surrounded by networks of blood capillaries.

The mechanism of the respiration process in the human