The types of food relationships are Predation , Symbiosis and Saprophytism .

Predation is a temporary relationship , because it ends by devouring the prey or a part of it , where the predator attacks , kills or devours the prey , Predation occurs in plant world and animal world .

Predation is less common in plant world than that in animal world because plants can make their own food ( carbohydrates and protein ) by photosynthesis process , Some plants can not make protein , because they can not absorb some components from the soil . 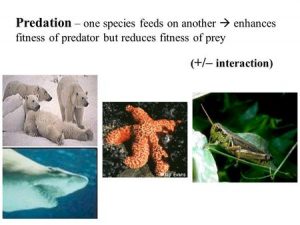 Predation in animals such as a lion preys a deer , a wolf preys a rabbit , a cat preys a rat , Spiders , where they make woven to catch insects , So , Lions , tigers , spiders , wolves , cats , snakes and sharks are considered as predator animals .

Some ways of self-defence against predation in living organisms

Many living organisms have ( appeal to ) different ways of defending themselves against enemies such as camouflage and mimicry .

Camouflage is a phenomenon in which living organisms protects itself ( hides ) from enemies by changing its colour to simulate the colours of its surrounding environment , This phenomenon is found in fish , frogs , birds , chameleon and most insects as butterflies .

Some bees look like wasps in forming lines ( stripes ) on their bodies to frighten their enemies which get afraid of wasps and escape from them .

Symbiosis is a common food relationship between two different types of living organisms , Types of symbiosis are mutualism , commensalism & parasitism .

The benefits of mutualism in human body

There are several kinds of bacteria that coexist with man , where each of them benefits from the other as follows :

Human body benefits from bacteria as : Some types of bacteria live inside man’s intestine and change some food remains into vitamin ( B ) , Some live on his skin and work on increasing the immunity of skin against diseases infection , Bacteria benefit from man in the previous case as the human body provides bacteria with food and shelter .

Commensalism is a food relationship between two living organisms where , one of them benefits from the other , while the other neither gets benefit ( in the form of food ) nor is harmed .

In this type of parasitism : The parasite lives externally on the host’s body and feeds by sucking the blood of the host , A parasite conveys diseases to the host , such as mosquitoes , lice , fleas , bugs , ticks , jawless lamprey ( that sucks fish’s blood ) .

In this type of parasitism : The parasite lives internally inside the host’s body and shares the host its digested food or feeds on its cells and tissues , Such as Bilharzia worms , ascaris worms , tape worms , filaria worms and liver worms .

Parasites cause many diseases to man such as :

The death of the host is considered a loss to the parasite because the parasite will lose its source of food and shelter , Some dogs , cats and birds which we have at home can be hurt by worms and some of these worms can infect human , To protect man and these living organisms , follow the proper way of cleaning and visit the veterinaries regularly to check them .

Saprophytism is food relationship in which saprophytes ( decomposers ) get their food by decomposing food remains or bodies of dead organisms , such as mushroom fungus , Bread mold fungus and Penecillium fungus that decomposes orange fruits .

Saprophytic organisms as bread mold fungus get their food by decomposing the food remains ( as moist bread ) causing the dark green layer on bread .