Sulfur (S)  is a nonmetal, It was known as brimstone, Phosphorus (P) is a reactive nonmetal, Graphite is not the only pure from carbon (C), Diamond is also carbon, The colour comes from the impurities caught within the crystal structure.

During the chemical reactions, The atom of the nonmetallic elements tends to gain electrons and change into negative ions. The negative ions carry a number of negative charges equal to the number of the gained electrons.

The electronic structure of the negative ions is similar to that of the nearest inert gas that follows the non-metals in the periodic table, The negative ion is an atom of the nonmetallic element gaining an electron or more during the chemical reaction. 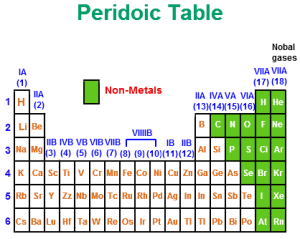 The non-metals on the modern periodic table.