What are the properties of nitrogen gas?

Nitrogen gas (N2) is mainly found in the atmosphere, it is also found in the Earth’s crust in the form of nitrates, it is found in the organic form in the living or dead plants and the organisms which form the humus.

Nitrogen gas is a colorless, odorless and tasteless gas that makes up 78 % of the atmosphere volume, it does not help in burning, it is non-flammable and it will not support combustion.

Nitrogen gas scarcely dissolves in the water, it is slightly lighter than air and slightly soluble in water, and it condenses at its boiling point -195.8o C (-320.4o F) to a colorless liquid that is lighter than the water.

Nitrogen compounds are formed naturally through the biological activity, they are also formed at a high temperature or at a moderate temperature with the aid of catalysts, it will combine with active metals such as lithium, magnesium, and titanium to form nitrides at high temperatures. 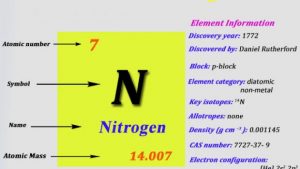 Nitrogen gas is necessary for many biological processes and is used as a fertilizer in the form of ammonia or ammonia-based compounds, and the compounds formed with halogens and certain organic compounds can be explosive.

Nitrogen gas is not an inert gas, it forms nitric oxide and nitrogen dioxide with oxygen, ammonia with hydrogen, and nitrogen sulfide with sulfur.

Nitrogen gas is used in industries such as the petroleum processing, the chemicals, the pharmaceuticals, the glass, and the fabrication processes, the steelmaking and other metals refining, the pulp, the paper manufacture, and it is used in the healthcare.

Nitrogen gas may be referred to as LIN or LN in its liquid form, and GAN or GN in its gaseous form, Gaseous nitrogen is valued for inertness, and it is used to shield potentially reactive materials from contact with oxygen.

Nitrogen gas does not easily react with a lot of elements as it is an inactive element, it has a neutral effect on litmus paper, and it can be condensed into a liquified state.

When liquid nitrogen is vaporized and warmed to ambient temperature, it absorbs a large quantity of heat, and the combination of inertness and its intensely cold initial state makes liquid nitrogen an ideal coolant for certain applications such as the food freezing.

Liquid nitrogen is used to cool the materials which are heat sensitive or normally soft to allow machining or fracturing, such as the tires, the plastics, some metals, and the pharmaceuticals, so liquid nitrogen is valued for coldness as well as inertness.

Nitrogen gas combines with lighted magnesium ribbon forming a white substance that reacts with the water forming ammonia gas which has a pungent smell.

Nitrogen gas is produced in large volumes in both gas and liquid form by cryogenic distillation, and cryogenic processes can produce very pure nitrogen.