Atomic size of the elements in the modern periodic table

The atomic radius is used as a measure for the atomic size of the atom, and its measuring unit is picometre (Pm), The picometre is part from million of million part of metre.

The atomic size decreases in the periods by increasing the atomic number (from the left to the right), due to the increase of the attraction force between the positive nucleus, and the outermost electrons. 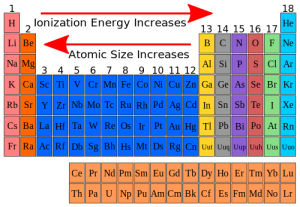 The nucleus is positively charged as it contains the protons, and the neutral neutrons, In the modern periodic table, You notice that the largest atom of the elements in size is the cesium atom, and the smallest one is fluorine.