Properties & Kinds of molecules, Relation between temperature of matter & its physical state

The molecule is the building unit of matter, It is the smallest part of matter which can exist freely & it has the properties of matter, Matter in any state (solid, liquid or gaseous) is composed of small building units called “Molecules“, Air is considered as matter because air has a mass and occupies a certain space when you open a perfume bottle in a closed room for a while, the odour of the perfume spreads all over the room.

You will notice that the odour of the perfume spreads all over the room, and the mass of the beaker decreases, The matter of the perfume is divided into tiny (small) particles which can’t be seen by the naked eye or by a microscope. 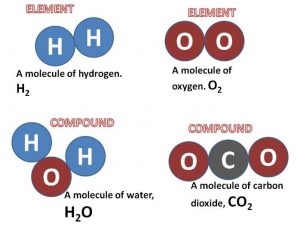 The properties of the molecules of matter

When we put a small amount of potassium permanganate in a glass containing water, the colour of water changes into violet because the molecules of ink or potassium permanganate are in continuous motion in all directions among water molecules, The molecules of solid matter have limited vibrational motion, while the motion of liquids is more free and that of gases is completely free.

When you put 300 cm³ of water in a graduated cylinder and 200 cm³ of ethyl alcohol to the water, the volume of the mixture will be less than 500 cm³, Some of the ethyl alcohol molecules are distributed in the intermolecular spaces that are found among water molecules.

The relation between the temperature of matter & its physical state

Melting process is the change of matter from the solid-state to the liquid state by heating, On heating the solid substance, Its molecules gain thermal energy, so, the speed of its molecules increases and at the melting point, the intermolecular force weakens, the intermolecular spaces increase and they become more freely leading to the change of matter from the solid-state into the liquid state, and this is known as Melting.

The element molecule is formed of similar atoms (one or more atoms) that combine together, The element is the simplest pure form of matter which can’t be analyzed chemically into a simpler form by simple chemical methods.

The compound molecule is formed of different atoms that combine together, The compound is a substance which is formed from the combination of atoms of two or more different elements with constant weight ratios, Examples of some known compounds:

Molecules of elements differ from molecules of compounds because the molecule of an element consists of similar atoms, but the molecule of a compound consists of different atoms, Oxygen is an element, while hydrogen chloride is a compound because the oxygen molecule is formed of two similar atoms, while hydrogen chloride molecule is formed of two different atoms.

What are the kinds of molecules?