Site of occurrence: It occurs only in the reproductive cells: 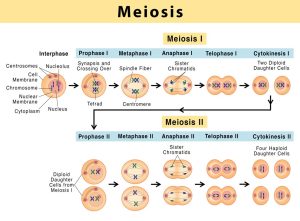 Before starting meiosis, the cell passes through the interphase. The meiotic division takes place in two stages:

It produces two cells, each of them contains half the number of chromosomes.

Phases of first meiotic division are: Prophase I ⇒ Metaphase I ⇒ Anaphase I ⇒ Telophase I

At the end of this phase: Crossing over phenomenon occurs. Nucleolus and nuclear membrane disappear. The spindle fibers are formed and connected to the chromosomes at the centromere. Each two homologous chromosomes (in the tetrad) starts to move away from each other.

In this phase: The chromosomes pairs which are connected with the spindle fibers are arranged at the cell equator.

In this phase: The spindle fibers disappear, A nuclear membrane is formed around the chromosomes at each of the cell’s poles leading to the formation of two new nuclei, A nucleolus is formed at each pole of the cell.

At the end of this phase: The cell divides into two new cells, the nucleus of each of them contains half number of chromosomes (N) of the parent cell.

The crossing over phenomenon

Meiosis is considered the source of genetic variation on which the variation of organisms depends on due to the occurrence of the crossing-over phenomenon during it. Crossing over phenomenon plays an important role in meiosis because it contributes to genes exchanging between the two homologous chromosome’s chromatids and distributing them randomly in the gametes.

Importance of the crossing over phenomenon

It works on the variation of genetic traits among the members of the same species. where it contributes to the exchange of genes (that carry genetic traits) between the two homologous chromosome’s chromatids, and distributing them randomly in the gametes.

In the final phase (telophase II) of this division, four cells (four gametes) are produced and each of them contains half the number (haploid number) of chromosomes of the parent reproductive cell.

Meiotic cell division is called reduction division because the produced cells contain half the number (haploid number) of chromosomes of the parent reproductive cell.

In the first meiotic division

In the second meiotic division

Cancer occurs when some of the body cells are divided continuously in an abnormal way without controlling leading to form a mass of cells which is called the tumor.

Tumor: The mass of cells produced due to the abnormal continuous division of cells.

The Egyptian scientist Dr. Mustafa El-Said discovered a way to detect the cancer cells and kill them by using very small molecules of gold measured by nanometer unit, so they called Nano-molecules and this technic is called Nano-technology that we can benefit from it in

Discovering the cells infected with cancer by using Nano-technical as follows: This technic starts by loading proteins (that have the ability to attach on the cancerous cell secretions) with Nano-molecules of gold and then injecting them into the patient. The loaded proteins with Nano-molecules of a gold pass from the blood of the patient, then attach to the cancerous cell surface to monitor it through a microscope, each cell separately.

Nanotechnology is called by this name because in which very small molecules are used which their lengths are measured nanometer unit. Laser is used for the treatment of cancer by nanotechnology because the nano-molecules of gold which stuck to the surface of cancerous cell absorb the light of the laser and convert it into heat which leads to burn and kill the infected cell.