Proteins in your blood maintain the fluid balance between your blood & the surrounding tissues. It is essential in building bones, and body tissues, such as muscles. It acts as a buffer system, helping your body maintain proper pH values of the blood and other bodily fluids. Protein is crucial to good health. It participates in every process of a cell, The name of the protein comes from the Greek word proteos, meaning “primary” or “first place”.

Proteins are formed of amino acid residues (more than 100 amino acids) linked together by peptide bonds, chemically, polymerization of amino acids into protein is a dehydration reaction, they are of high molecular weight (more than 5000) colloidal in nature, non-dialysable, and heat-labile. Each protein has a unique, precisely defined amino acids sequence, amino acid sequences are important for several reasons:

Bonds responsible for protein structure are:

These are weak bonds, can be separated easily, however, the large numbers of these bonds in the protein molecule add up to the forces favoring protein folding.

The conformation of proteins (Orders of protein structure)

In its native form, protein molecule has a characteristic three-dimensional shape (primary, secondary, tertiary structure), which is required for its specific biological function or activity, proteins formed of two or more polypeptide chains have a quaternary structure. 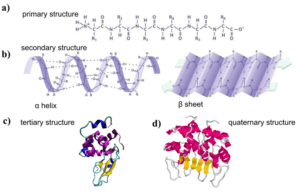 It is the three-dimensional structure of each polypeptide chain, there are two main forms of tertiary structure: fibrous and globular types.

Domains are the functional and three-dimensional structural units of a polypeptide, folding of the peptide chain within a domain is independent of folding in other domains, thus each domain has the characteristics of a small compact globular protein, polypeptides that are greater than 200 amino acids generally consist of two or more domains,

Certain polypeptides will aggregate to form one functional protein, proteins possess quaternary structure if they consist of 2 or more polypeptide chains, structurally identical, or totally unrelated united by non-covalent bonds (hydrogen, electrostatic bonds, and hydrophobic interaction), such proteins are termed oligomers, and the individual polypeptide chain is termed monomer or subunit, this protein will lose its function when the subunits are dissociated.
e.g. Hemoglobin is an example of protein present in the quaternary structure, it is a tetramer having 2α chains and 2β chains.

It is the loss of native structure (natural conformation) of protein by many physical or chemical agents leading to changes in the secondary, tertiary, and quaternary structure of proteins due to rupture of the non-covalent bonds (hydrogen bonds, hydrophobic bonds, and electrostatic bonds and may be disulphide, but not peptide bonds), with loss of biological activity. Denaturation disrupts all orders of protein structure except the primary structure.