The placenta offers oxygen & nutrients to the growing baby and it removes waste products from your baby’s blood. It develops in the uterus during pregnancy, It attaches to the wall of the uterus, and the baby’s umbilical cord arises from it. It is attached to the top, side, front, or back of the uterus.

The placenta is the site of nutrient, gas exchange, and excretion between the fetus and mother. Placentas are a defining characteristic of placental mammals but they are found in marsupials and some non-mammals with varying levels of development.

Development of the placenta

At first, the chorionic villi cover the entire surface of the chorion. Later on, the villi opposite the decidua basalis continue to grow and expand to form chorion frondosum. While the villi related to the decidua capsularis degenerate and this part of chorion called chorion leave. The placenta is formed by: 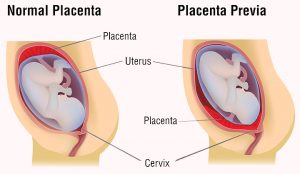 Structure of the placenta

It is the structures that separate the maternal and fetal blood. It is not a true barrier because few substances are able to cross it, most drugs in maternal blood can pass through it to the fetal circulation. Some of which can harm the fetus and cause major congenital anomalies. Early in pregnancy (till about 20-week gestation), the placental barrier is formed of four layers:

After 20 weeks the cytotrophoblast degenerate so increases the permeability of the placenta, Towards the end of pregnancy, the fibrinoid material made of fibrin is formed on the surface of the villi to decrease the permeability, so the placental barrier is formed of this fibrinoid material, primary mesoderm, the syncytiotrophoblasts, and the endothelium of the fetal blood vessels.

Functions of the placenta

Abnormalities of the placenta

3. position abnormalities: Placenta previa where the placenta is attached to the lower uterine segment (due to low level of implantation of the blastocyst). It causes severe antepartum hemorrhage. There are three types of placenta previa:

Placenta previa is usually diagnosed by ultrasonography during pregnancy and delivery must be by Cesarean section to avoid severe antepartum hemorrhage.

4. Abnormal penetration to the uterine wall:

In these two abnormalities, the placenta fails to separate from the uterus after the birth of the fetus and may cause severe postpartum hemorrhage.

5. Abnormalities due to the attachment of the umbilical cord:

Placenta importance in fetal development & the most common placental problems