Animal tissues can be differentiated into basic types , each of them matches with the function it performs , such as Epithelial tissues , Connective tissues , Muscular tissues and nervous tissues .

They cover the outer surface of the body and line the body’s internal cavities , They are composed of a great number of closely adjacent cells connected by little interstitial ( intercellular ) substance .

They perform different functions depending on their site in the body , such as : 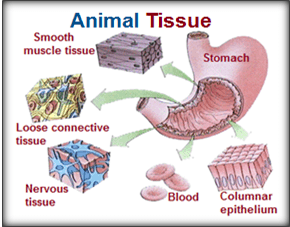 It gathers between being fairly solid and quite elastic, Function : Connecting the different body tissues and systems with each other , So , it is widely spread such as the dermis of skin and mesentries .

Its intercellular substance is solid in which calcium deposits in case of bones, Functions : Supporting the body such as the bones and cartilages .

its intercellular substance is fluid, Function : Transporting the digested food and excretory substances , such as the blood and lymph .

They are made up of cells known as muscular cells or muscle fibres , which are distinguished from other body cells by their abilities of contraction relaxation , So , this helps the organism to move, They are divided into three types which are Smooth muscles , Skeletal muscles and Cardiac muscles .

They consist of unstriated involuntary muscle fibres, They present in the wall of viscera such as wall of digestive canal , urinary bladder and blood vessels .

They consist of striated voluntary muscle fibres, They are usually connected with the skeleton , such as the muscles of arms , legs and trunk .

They consist of striated involuntary muscle fibres , They contain intercalated discs that bind the muscle fibres together and make the heart beats in a rhythmic way as one functional unit, They present in the heart wall only .

They consist of cells called nerve cells ( or neurons ), The nerve cell is the building and functional unit of the nervous system .

Function : Receiving both the internal and external sensory stimuli and conduct them to the brain and spinal cord , then transmitting the motor impulses to the effector organs ( muscles or glands ) , Therefore , nervous tissues are responsible for different activities of body organs .

Stem cells are the cells that have the ability to form any other type of specialized cells, such as muscle cells, liver cells, nerve cells and skin cells, according to specific environmental treatments at the laboratory, Stem cells are formed during the early stages of the fetus development .

Role of stem cells in treating of intractable diseases :

They are used to produce dopamine substance used to treat some nervous diseases as Parkinson disease, They are transplanted to give cardiac muscle cells as a compensation about the decrease of secretion of this hormone by pancreas for diabetes patients.

Cell fractionation is one of the modern technologies used to :

Cell fractionation technology depends on using ultracentrifuge apparatuses to separate cell organelles at different speeds depending on the different densities of these organelles .