Drived lipids are derived from simple lipids and compound lipids by hydrolysis. They also include substances related to lipids. Derived lipids include fatty acid, glycerol, sphingosine, and steroid derivatives. Steroid derivatives are phenanthrene structures, they are quite different from lipids, and made up of fatty acids.

The derived lipids include:

They are either derived from simple and compound lipids (1, 2, 3) or associated with lipids (4, 5, 6) and they possess the general physical characteristics of lipids. 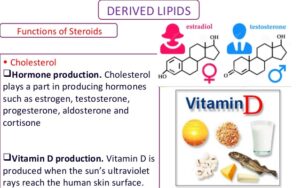 This group of steroids has a hydroxyl group (OH) at C3 i.e. it is an alcohol and an aliphatic side chain at C3.

Biomedical importance: Cholesterol is the main sterol in the human body (Nervous tissue, brain, suprarenal gland, and in bile). It is a major constituent of the plasma membrane. It is the precursor of sex hormones, cortical hormones, vitamin D, and bile acids.

Sources of cholesterol: It is formed in the body from acetyl CoA. It is present in the diet: egg yolk, meat, liver, and brain. (It occurs in animal fats but not in plant fats).

Chemistry of cholesterol: It is solid alcohol of 27 C and contains a sterane ring and has a double bond between C5 and C6, It has amphipathic properties which allow it to play a structural role in the membrane and in the outer layer of lipoprotein.

Cholesterol derivatives: 7-dehydrocholesterol (Provitamin D3) is stored under the skin and by the effect of ultraviolet rays (in sunlight) it is transformed into cholecalciferol (vit. D3)

It is characterized by having an extra methyl group at C24. It is present in lower plants as yeast and moulds, e.g. Ergosterol (provitamin D2). It has a double bond between C22 and C23.

2- Secondary bile acids: They are produced by the action of intestinal bacteria on 1ry bile acids, (deconjugation from glycine or taurine and 7-dehydroxylation).