Acids are substances (materials) which dissociate in water producing positive hydrogen ions H+, The chemical formula for all mineral acids begins with hydrogen joined with:

Acids have a sour taste. they change the colour of blue litmus paper into red due to the presence of the positive hydrogen ions H+. Acids are classified according to their strength [ degree of ionization] into: 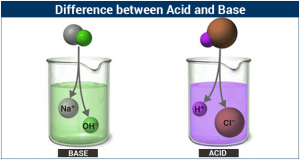 Bases change the colour of red litmus paper into blue due to the presence of the negative hydroxide ions (OH)−, Their aqueous solutions have a bitter taste and feel slippery. If you have two unmarked tubes, one contains acid and the other contains a base. How can you distinguish between them?

Oxides are compounds resulted from the combination between oxygen and an element even though it is a metal or a nonmetal. oxides are classified into metal oxides and nonmetal oxides.

All acids turn colour of litmus into red and having a sour taste, while all bases turn the colour of litmus into blue with a bitter taste because acids, when dissolved in water, produce positive hydrogen ions H+ which responsible for their properties, while bases, when dissolved in water, produce negative hydroxide ions (OH)− which responsible for their properties.

Properties of Acids and Bases & Theories defining acids and bases

Salts formation, The chemical formula of salts and its naming

What are the types and properties of salts?