Simple and double substitution reactions, Reaction between an acid & a salt 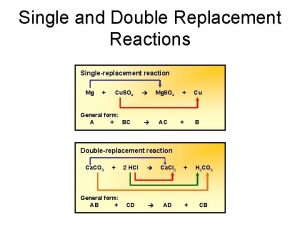 A metal substitutes the hydrogen of water and acid

The substitution of metal to hydrogen of water

The substitution of metal to hydrogen of acid

When you put a small amount of zinc in a beaker, few aluminium sheets in the second beaker and a few copper turnings in the third beaker, then pour a little amount of dilute hydrochloric acid to each beaker.

Although aluminium comes before zinc in C.A.S., It takes more time than zinc to react with the acid due to the presence of a layer of aluminium oxide on aluminium sheets which takes time to separate from aluminium then aluminium becomes exposed to the acid.

A metal substitutes another one in its salt solution

Some metals replace other metals (in their solutions) that follow them in the chemical activity series, when you put some pieces of magnesium ribbon in a beaker containing blue copper sulphate solution, The blue colour of copper sulphate disappears and a reddish-brown precipitate is formed.

Magnesium is more active than copper (as it comes before in the chemical activity series) so, It replaces copper in the copper sulphate solution to form magnesium sulphate ( colourless ) and copper precipitates ( reddish brown ppt.).

When you put some pieces of copper in sodium sulphate solution, No reaction takes place, because copper is less active than sodium as it comes after sodium in the chemical activity series.

The reaction between an acid and an alkali (Neutralization reaction)

On heating the products (resultants) of the previous reaction, H2O evaporates and HCl (table salt) remains.

The reaction between an acid and a salt

Acids react with salts and the resultant depends on the type of both the acid and the salt, Hydrochloric acid reacts with sodium carbonate forming sodium chloride, water, and carbon dioxide which turbid the limewater.

The reaction between two solutions