Some of representative elements groups are known as regular groups, Because their elements show a great regularity & graduation in their properties and that is not found in the transition elements, One of the aims of the classification of elements in periods & groups is to facilitate their study in a regular way.

Elements of group 1A (Alkali metals) 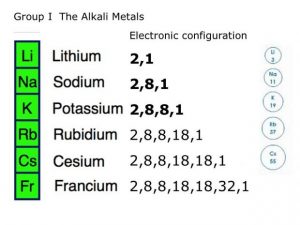 The abundance of alkali metals in nature

The most common abundant alkali metals are:

Sodium: The order of the abundance in the Earth’s crust is 6th, The most important ore is Rock salt NaCl.

Potassium: The order of the abundance in the Earth’s crust is 7th, The most important ores are potassium chloride KCl, which is found in seawater, Carnallite deposits (KCl.MgCl2.6H2O).

Other metals of this group are rare, like francium that is a radioactive element which was discovered in 1946, as a product of the disintegration of actinium, The amount of francium formed in this decaying process is very small, All of what is known about it, are:

Presence of a single electron in the outer energy level.

All elements of this group (1A) are characterized by the presence of one single electron in the outer energy level (ns¹), accordingly:

Their second ionization potential is very large, because the second electron will be removed from a complete or a saturated energy level (stable), They are strong reducing agents, because of its ability to lose its valence electron easily, Most of their compounds are ionic, the ion of each element is identical in electronic structure to the noble gas which precedes it in the periodic table.

So, They are the most malleable metals with the lowest melting and boiling points.

Their atoms have the largest atomic volume

Any metal of this group has the largest atomic volume than any other atom in its period, The volume of the atom increases down through the group with increasing atomic number, Due to the increase in the volume of the atom, alkali metals show the following properties:

The photo-electric phenomenon is the liberation of electrons from the outer surface of the alkali metals when they are exposed to the light, Cesium is used in photo-electric cells, Because of its large atomic volume & its small ionization energy, so, it is easy to liberate the valence electron when exposed to light.

You have already learned that when the valence electrons of the element are excited to a higher energy level by heating or electrical discharge and then the excited electron comes back to the ground state, there is an emission of radiation of visible light occurs.

Similarly, on exciting the electrons of these elements’ ions to high energy levels, they give different characteristics colors, This property is used in the dry test (flame test) of these elements in their compounds as the following:

A platinum wire is dipped in concentrated hydrochloric acid to clean it, Dip the platinum wire in the unknown salt and expose it to the non-illuminant Bunsen flame, The flame will acquire the characteristic colour of the cation.

The action of atmospheric air

All elements of this group are chemically active, they are oxidized easily in air to lose their metallic luster, due to forming a layer of the oxide , Lithium can react with nitrogen of the atmospheric air by heating and gives lithium nitride which reacts with water to produce ammonia gas, Alkali metals are kept under the surface of liquid hydrocarbons such as kerosene, To prevent their reaction with humidity activity.

The reaction of alkali metals with water

Elements of this group are located at the top of the electrochemical series, So, they can replace the hydrogen of water and this reaction is accompanied by the liberation of a large amount of energy which leads to the burning of the evolved hydrogen gas.

The reaction becomes more vigorous down through the group (from lithium to cesium) where in the reaction of cesium, an explosion occurs.

Example: The reaction of sodium with the water, Sodium fires are not put out by water, Because sodium reacts strongly with water in an exothermic reaction, which leads to the burning of the evolved hydrogen gas.

The reaction of alkali metals with oxygen

The trend in the activity in the elements of this group (1A) is clear when it reacts with oxygen, When these elements are burnt in an atmosphere of oxygen, they give three types of oxides, which are:

Normal oxide: Lithium gives lithium oxide “normal oxide” when it is burnt in an atmosphere of oxygen, The oxidation number of oxygen in it (− 2).

Peroxide: Sodium gives sodium peroxide when it is burnt in an atmosphere of oxygen, The oxidation number of oxygen in it (− 1).

Superoxide: Potassium, rubidium and cesium give superoxides when they are burnt in an atmosphere of oxygen, The oxidation number of oxygen in it (− 1/2).

Preparation of oxides of the alkali metals

The normal oxide of the alkali metals (M2O) can be prepared by dissolving the metal in liquified ammonia and then adding the calculated amount of oxygen, M refers to the symbol of the metal, It is a strong basic oxide that reacts with water to give the strongest known alkaline solutions except Li2O.

Where H2O2 decomposes easily into water and oxygen, oxygen gas is responsible for making oxidation process.

While the superoxide compounds react with water and acid, producing hydrogen peroxide and oxygen.

The reaction of alkali metals with hydrogen

Alkali metals react with hydrogen giving ionic hydrides, in which hydrogen has an oxidation number equals (− 1).

Hydrides are ionic compounds in which hydrogen atom has oxidation number (− 1), Hidride compounds act as reducing agents because they react with water and hydrogen gas evolves, where hydrogen gas is responsible for making reduction process.

The reaction of alkali metals with acids

Alkali metals can replace the hydrogen in acids and this reaction is a vigorous reaction.

Reaction of alkali metals with nonmetals

Alkali metals react vigorously with halogens forming very stable ionic halides and the reaction is accompanied with an explosion.

The action of heat on alkali metal oxygenated salts

All alkali metal carbonates do not decompose when heated (melted only), except lithium carbonate which decomposes at 1000° C.

Potassium nitrate is used in the manufacture of bombs because it partially decomposes by heat and the reaction is accompanied by an explosion.

Sodium nitrate is not used in the manufacture of bombs, Because it is a deliquescent material that absorbs water vapor from the atmospheric air.