The types and properties of the acids

Types of the compounds

There are a countless number of existing compounds, they can be classified according to their properties only into the acids, the bases (alkalis), the oxides and the salts. 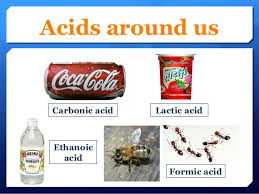 The acids are the substances which dissociate in the water producing the positive hydrogen ions (H+), The lemon juice, the vinegar, the fizzy drinks and sour milk are considered from the natural acids.

The acids are classified according to their strength (degree of ionization) into the strong acids (such as hydrochloric acid and nitric acid) and the weak acids (such as carbonic acid).

The properties of the acids

The acids have a sour taste, and they change the colour of the litmus paper into red due to the presence of the positive hydrogen ions  (H+).

The chemical formula of all mineral acids begins with hydrogen joined with one of the negative atomic groups such as sulphuric acid and nitric acid. 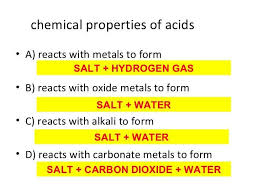 The chemical properties of acids.

The chemical formula of all mineral acids begins with hydrogen joined with one of the negative nonmetal ions such as hydrochloric acid  (HCl) and hydrobromic acid (HBr).

The acids destroy the chemical properties of bases, they conduct an electric current and they produce hydrogen ion ( H+) in solution, The chemical reacting of the acids with an active metal,  hydrogen gas (H2) is evolved.

Economic importance of some common acids, bases & salts (minerals)
Properties of Acids and Bases & Theories defining acids and bases
The importance and properties of the bases (alkalis)