Alkali metals are elements that are not found in nature in a free state, but rather in the form of ionic compounds because these metals easily lose their valence electron and they are the most powerful reducing agents, Preparing of these metals involves the electrolysis of their molten (fused) halides.

Extraction of sodium metal from its ores

By the electrolysis of molten sodium chloride in the presence of a flux substance to decrease the melting point of the halide, Oxidation and reduction reactions occur at anode and cathode, such as the following: 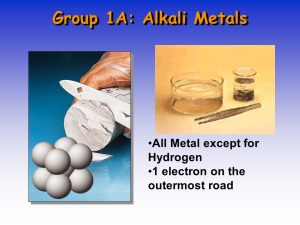 The most important properties of sodium hydroxide

The most important uses of sodium hydroxide

Observation: A blue precipitate of copper II hydroxide is formed which turns black on heating, due to forming of copper II oxide.

Observation: A white gelatinous precipitate of aluminum hydroxide is found which dissolves in excess reagent (NaOH), To form sodium meta aluminate (NaAlO2), which is soluble in water.

The most important properties of sodium carbonate

The most important uses of sodium carbonate

Preparation of sodium carbonate in laboratory

By passing carbon dioxide gas through a hot solution of sodium hydroxide, then the solution is left to cool, white crystals of hydrated sodium carbonate are separated gradually.

Preparation of sodium carbonate in the industry (Solvay process)

The scientist Solvay had reached a method to prepare sodium carbonate from table salt, by passing ammonia and carbon dioxide gases in a saturated aqueous solution of sodium chloride to produce sodium bicarbonate.

Then heating sodium bicarbonate, it will decompose to sodium carbonate, water & carbon dioxide.

They are considered from the common ions present in the blood plasma & in the intercellular fluids in the body, They are found in many natural sources such as vegetables (especially celery), milk & its products, They have an important role in the vital processes, Because they represent the required medium to transfer the nutrients, such as glucose and amino acids.

They are considered from the common ions present in the living cell, They play an important role in the oxidation of glucose in the living cell, to produce the required energy for its activity, They are found in many natural sources such as meats, milk, eggs, vegetables & cereals.