Windows Media Player is a software program that you can use to listen to CDs or music files, You can watch DVDs, and shop for online media, It is free software, It is available to the users of Windows 95 and later versions of Windows operating system.

There are different versions of Windows Media Player such as version 11 for Windows XP and Vista and version 12 which comes with Windows 7, It is a highly versatile program that can be used to view videos, listen to music files, and streaming audio such as Internet radio.

You can use Windows Media Player to rip your CDs to your computer’s hard drive, You can use it to burn CDs or DVDs and to sync the files to a portable device such as an MP3 player.

Later versions of Windows Media Player include access to the Media Guide, You can use the Media Guide to browse a website for music, movies, TV, and Internet radio, It is free for anyone running Windows, and it is the best. 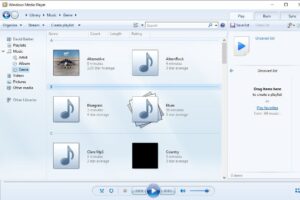 Windows Media Player Media Guide has advanced features such as the ability to create playlists and synchronize with external devices, It provides an interface where you can download free media and purchase media online.

Windows Media Player is a full-featured player that plays back audio CDs, audio files, DVDs, and videos, It can play some audio and video streams directly from the Internet.

Windows Media Player comes with Windows operating systems such as Windows XP, Vista, and Windows 7, It is ready to use when you set up your computer.

Videos can be organized by actors, genre, or rating, Windows Media Player can create playlists, You can mix up the songs from different albums in any order in your playlist, then You can save your playlist for future use.

Windows Media Player is easy to learn, It has little no work to rip music once configured, You need nothing to download or install it, It can automatically rip upon inserting a CD, For Windows users, Windows Media Player is the best and easy way to copy your CD collection to the hard drive, It is powerful to meet most people’s needs but it has limitations.

Windows Media Player automatically downloads all the information about the CD that you’re ripping, and it embeds the information in the MP3 files, Your files will have the name of the album, artist name, song title, year, and more.

Windows Media Player can not stream the video properly over slow DSL connections, It is limited as to which portable devices it can sync to, it won’t sync to an iPod or even Microsoft’s own Zune, the classic Windows menu is disabled by default.

Windows Media Player has small album cover art, It has no volume normalizing, It is limited to Windows and MP3 formats, It is inflexible MP3 file and folder naming, It has less flexibility in choosing sound quality, MP3 is the most compatible format available.

Windows Media Player downloads the picture of the CD cover by 200×200 pixels, Other CD ripping programs download images of 300×300 pixels or better, This increase in the picture size can decrease your ability to read smaller type and seeing smaller artwork details.