Open burning of plastic or rubber wastes can be dangerous to your health and the environment, The old barrels or the wood stoves do not reach high enough temperatures to destroy many of the dangerous chemicals created when the plastic burns, These include dioxins and furans.

The studies have linked dioxins and furans to cancer and the respiratory diseases, Plastic such as PVC (polyvinyl chloride) is common in such things as the bottles and the jugs, the plastic packaging and the blister packs, When these are burnt in the house, carbon monoxide, dioxins, and furans are released into your air.

Carbon monoxide is a pretty well-known poison, dioxins and furans are not, the ash produced from burning material that contains plastic and rubber could be hazardous, This cannot be spread on the soil or dumped in your waste bin.

Burning these plastics can release dioxins, Dioxins are unintentionally but unavoidably produced during the manufacture of materials containing chlorine, including PVC and other chlorinated plastic feed-stocks, Dioxin is a known human carcinogen and the most potent synthetic carcinogen ever tested in the laboratory animals.

Dioxin is a toxic organic chemical that contains chlorine and it is produced when chlorine and hydrocarbons are heated at high temperatures, To inhale dioxin or to be exposed to its fumes can cause many deadly results. 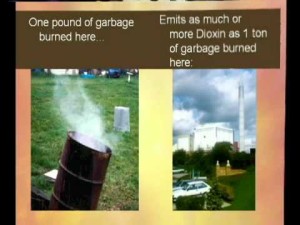 Carbon dioxide is the major gas emitted by the trash burning, Those emissions are dwarfed by other sources on the global scale such as the cars and the power plants, amounting to just 5 percent of total global carbon dioxide emissions.

The carbon dioxide that comes from the trash burning can be a significant source in some countries and regions, and it is one not reflected in the official greenhouse gas inventories for those places.

29 percent of global anthropogenic emissions of small particulate matter (tiny solid particles and liquid droplets from the dust to the metals that can penetrate deep into the lungs) come from the trash fires.

About 10 percent of mercury emissions come from open burning, as well as 40 percent of polycyclic aromatic hydrocarbons (PAHs), Such pollution can cause lung and neurological diseases, and they have been linked to the heart attacks and some cancers.

Burning trash isn’t just bad for human health, It could pump more greenhouse gases into the atmosphere, Smoldering garbage turns out to be a significant source of the greenhouse gases causing the climate change.

Burning of plastic, rubber, or painted materials creates poisonous fumes and they can have damaging health effects for the people who have asthmatic or heart conditions.

Plastic burning can increase the risk of heart diseases, the respiratory diseases such as asthma and the emphysema, and It causes rashes, nausea, or headaches, It damages in the nervous system, the kidney or the liver, in the reproductive and development system.

Burning of polystyrene polymers such as the foam cups, the meat trays, the egg containers, the yogurt, and the deli containers releases styrene, Styrene gas can readily be absorbed through the skin and the lungs, At high levels, styrene vapor can damage the eyes and the mucous membranes.

Long-term exposure to styrene can affect the central nervous system, causing headaches, fatigue, weakness, and depression, Not only these people who are burning the trash are exposed to these pollutants but also their neighbours, children & families.

The pollutants released from burning plastic waste in a burn barrel are transported through the air either short or long distances and they are then deposited onto the land or into the water.

Bioaccumulation of pollutants usually occurs indirectly through the contaminated water and the food rather than breathing the contaminated air directly, In wildlife, the range of effects associated with these pollutants includes cancer, deformed offspring, the reproductive failure, the immune diseases, and the subtle neurobehavioral effects.

The humans can be exposed indirectly just like the wildlife especially through the consumption of contaminated fish, meat, and dairy products, The toxic components inhaled through the smoke from burning plastic materials may cause the hormonal imbalance and sex behavioral orientation of your newborn baby.

Oil-fired or wood stoves do not reach high enough temperatures to destroy many of the dangerous chemicals created when the plastic burns, The municipal solid waste incinerators such as the double-chambered incinerators at the Energy from Waste Plant can reach a temperature of 1800 degrees Fahrenheit (982 C), providing plenty of oxygen to complete the burning process.

The oiled fired and the wood stoves only tend to smolder and smoke, releasing plumes of toxic fallout into your backyard and the surrounding community, The ash is also potentially hazardous and not appropriate to spread on the soil.