Myiasis can be defined as the invasion or infestation of tissues or organs of live humans or other vertebrate animals with larvae of higher Diptera (Figure 29). These larvae (maggots) feed for at least a period of time on the host’s dead or living tissues, liquid body substances or ingested food.

Flies Causing Myiasis can be classified into:

According to the Biological Habits of the Adult Fly:

This is the condition when the fly larvae are obligatory tissue parasites and can only develop on or in living tissues, Female flies deposit their eggs on dry soil or sand in shady places; especially those contaminated with human urine or excreta. Adult flies can also lay their eggs on soiled clothes or clothes that were left to dry outdoors.

Once these clothes are worn without ironing, eggs hatch, and the larvae, aided by their powerful oral hooks, bury themselves completely under the skin except for their posterior spiracles (respiratory openings) causing boil-like swellings (furuncular myiasis), Examples: Cordylobia and Dermatobia flies. 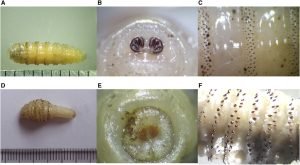 This group includes flies in which their larvae can complete their development without a host. They habitually oviposit or larviposit on dead bodies of man or animals. However, they can develop in a host if entry is facilitated by the presence of a wound or ulcer, which is secondary infected since they are attracted by the offensive discharges coming from these neglected wounds.

They are also attracted to inflamed ears and eyes. Thus, deposit their larvae or eggs in such tissues. The presence of larvae prevents healing and induces sepsis in the affected sites. Examples: Sarcophaga, Calliphora, and Lucillia flies.

According to the Site of Tissue Invaded: Different tissues may be invaded and thus we may find the following kinds of myiasis.

a. Intestinal Myiasis: Several flies may deposit their eggs or larvae on human food or on the anus during sleep or defecation in open latrines (particularly in children living in rural areas). Larvae find their way to the intestine and may cause nausea, vomiting, abdominal discomfort, or pain with diarrhea.

b. Urogenital Myiasis: Larvae may enter through urinary or genital orifices or through lesions on these orifices. They may cause inflammation with pus, mucous, and blood in the urine. Obstruction to the urine flow with pain can occur. The maggots (larvae) passed in urine are used for diagnosis of the species of the invading fly.

a. Cutaneous Myiasis: Cutaneous myiasis can occur by two ways:

i. Invasion of Wounds or Ulcers

Traumatic (Wound) myiasis occurs when wounds or ulcers are invaded by larvae of flies, which would usually lay their larvae or eggs in decaying flesh of dead animals and accidentally deposit their eggs or larvae in neglected sores or wounds. These larvae may cause extensive damage by burrowing deeply into the wound.

As they feed on the wound, they increase in size and cause tissue destruction. Larvae reach maturity in about a week then they leave the wound, fall to the ground into which they burrow, and then pupate, Examples: (Sarcophaga, Calliphora, and Lucilia flies.

Furuncular Myiasis: Larvae (mainly of Cordylobia and Dermatobia flies) may invade hair follicles and produce furuncular swellings. Symptoms of this infestation include itching in the first two days which subsides and is replaced by more severe pain as the larva grows and becomes active in the boil-like swelling.

Serous fluid exudes from the lesion and the posterior end of the larva can sometimes be seen. Infestation can occur anywhere on the skin surface, scalp, arms, and shoulders. Examples: Cordylabia and Dermatobias.

Creeping (Migratory) Myiasis: Larvae may accidentally invade the unbroken skin of the unnatural host and wander in the dermal tissue forming serpentine-like lesions with papules and pustules.

Larvae of several species of flies may find their way to the conjunctiva and may reach the brain. Severe pain in the eye is the first complaint in ocular myiasis. Larvae can cause conjunctivitis, corneal ulcers, or even panophthalmitis.

Larvae find their way to the nose and may reach the brain. In the nose, they cause obstruction and a persistent bloody purulent discharge.

Purulent exudates discharged from running ears attract flies and they deposit their eggs or larvae there and cause otitis externa, Later, larvae invade the middle ear, inner ear, or even mastoid sinuses or the brain tissue in extreme cases.

Ocular, nasopharyngeal, or aural myiasis are considered as semi-specific (facultative) myiasis if the flies are attracted to offensive inflammatory discharges in these sites. However, if the larvae of adult flies invaded healthy, non-inflamed eyes, nose, and ears, the type of myiasis in these cases is considered specific (obligatory) myiasis.

It can be made only upon finding the larvae of higher Diptera (maggots) which should be removed and examined for identification.

1. Eradication of the fly population and their breeding places by suitable insecticides

2. Avoidance of infestation by taking the following precautions:

Although larvae of higher Diptera are considered as harmful parasites, they can be of benefit to man. This can be in two aspects: Maggot therapy and Medicolegal aspects.

In World War 1, and before the era of antibiotics, soldiers with maggot-infested wounds were noticed to get better faster than others. Being voracious feeders of necrotic tissues, larvae of Lucilia flies were introduced by surgeons into the wounds to enhance wound debridement and healing, Nowadays, readymade dressings and topical applications containing larval extracts are used instead of live maggots.