Parasitology is the area of biology concerned with the phenomenon of dependence of one living organism on another, A parasite is defined as an organism that lives on, or within another organism called the host at whose expense the parasite obtains food and protection, Usually, the parasite causes injury to its host.

Medical Parasitology is the subject that deals with the parasites that infect man, the diseases they produce, the clinical pictures, and the host responses against them. It is also concerned with the various methods of their diagnosis, their treatment, and finally their prevention and control. 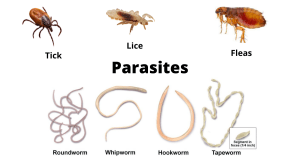 The close association between two different organisms is known as symbiosis. This association is in the form of commensalism or parasitism, In commensalism, the organism derives benefit from its host without causing injury to it. However, parasites obtain food and protection from their hosts and are harmful to them, this relation is known as parasitism (the parasite derives benefit from its host and causes injury to it).

Sources of Parasitic Infection or Infestation

Parasites can be acquired from one of the following sources which harbor the infective stage:

Portal of Entry of the Parasites into the Body

The infective stage of the parasite enters the human body through different routes:

Portal of Exit of the Parasites from the Body

For the continuation of the life cycle, the diagnostic stage of the parasite must have a portal of exit from its host and this can occur via faeces as eggs or larval stages of most helminths and cysts or oocysts of intestinal protozoa. Urine, sputum, blood or genital tract can be also other portals of exit.

This is the site where the parasite lives and may multiply in its host e.g. small intestine, large intestine, blood, reticuloendothelial system, or lymphatics.

The ways in which damage may be produced in parasitic infections can occur through different mechanisms which include the following:

Enzymes elaborated by the parasite can produce necrosis of tissues

4. Stimulation of the host immune response

Destruction of red blood corpuscles, reticuloendothelial cells, and other tissue cells can occur.

Parasites that are of medical importance in relation to humans are divided into three major categories or groups: Helminths or worms, Protozoa; unicellular micro-organisms, and Arthropods.