Medical mycology is the study of mycoses of man which are the diseases caused by fungi. Of thousands of species of fungi known, less than 100 are pathogenic to man. Fungi are widespread in nature, the natural habitat for most species being the soil.

I. Superficial mycoses: These are caused by fungi that affect the superficial layers of the skin (epidermis and dermis) e.g: Dermatophytosis, Pityriasis Versicolor, Piedra, and Tinea Negra.

II. Subcutaneous mycoses: These are caused by fungi that affect the subcutaneous layers e. g.: Mycetoma, Chromomycosis, and Sporotrichosis.

Fungal Cell Wall: The fungal cell wall is composed of a complex network of proteins and polycarbohydrates that varies in composition depending on the fungal species.

Fungal Cell Membrane: Sterols account for approximately 25% of the weight of the cell membrane, Whereas mammalian cell membranes contain primarily cholesterol, ergosterol is the predominant sterol in many pathogenic fungi. 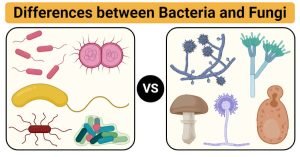 Differences between Bacteria and Fungi

Differences between Bacteria and Fungi

According to microscopic morphology, fungi are divided into four groups:

These are fungal diseases due to a group of fungi of the genus Aspergillus. These saprophytic fungi are pathogenic only under certain conditions of immunosuppression. The disease is usually sporadic in distribution. The clinical picture is dominated mainly by respiratory manifestations.

A. fumigatos, causes 90% of diseases.

Pulmonary Aspergillosis: This can be further subdivided into:

This is the most frequent form of aspergillosis, represent about 85% of all cases of aspergillosis. It is defined as the development in situ of Aspergillus in a pre-existing lung cavity. Usually on the apex of the lung. The disease is rarely bilateral and sometimes multiple. The pre-existing cavity is usually a healed tuberculous cavity. Other cavities include bronchiectasis, emphysema, carcinoma, congenital cysts…etc. Males are more affected than females. The disease is rare below the age of 12 years. Clinical diagnosis depends upon the triad of Deve:

Detection of Aspergillus in sputum either by direct microscopic examination using KOH preparations or by culture on Sabouraud’s Dextrose agar incubated at 37- 40° C, which reveals green colonies with a central dome of the conidiophore. Aspergillus appears as filamentous septate structures that usually branch.

This disease affects mainly atopic subjects presenting with bronchial asthma and labile pulmonary infiltrate, There is also high eosinophilia in the peripheral blood and in the sputum, Precipitins are present only in 60 % of cases.

Candida is common in the microflora of the atmosphere. C Albicans (the most frequent etiologic agent) are present in the mucous membranes of the alimentary tract and vagina in 10-50% of healthy subjects. It is never present as a saprophyte in blood or other internal fluid or in the tissues.

Occurs due to exposure to heat and humidity and to topical moisture as in bedridden compromised patients.

Candidosis of the nail bed is a chronic condition often associated with the frequent immersion of hands in water.

The disease is common during pregnancy and in diabetic patients.

Patients with chronic bronchial disease or pulmonary infection treated with antibiotics have increased Candida counts in their sputum.

Candiduria may indicate either benign colonization or true infection of the urinary tract, Candida can cause pyelonephritis and cortical renal infection.

It occurs only in severely compromised patients.