Protein is important for keeping the muscles, bones, and tissues healthy. Protein plays a role in many bodily processes, such as blood clotting, fluid balance, immune system responses, vision, hormones, and enzymes. Protein is very important for growth and development, especially during childhood, adolescence, and pregnancy, Both animal and plant foods can be excellent sources of protein.

Proteins are polymers of amino acids. They perform many essential functions in the mammalian body.

Most of the absorbed amino acids pass to the liver through portal blood circulation. A small part escapes the liver to systemic circulation. This is responsible for an increase of blood amino acid level from 2-4 mgldL in a fasting state to 6-8 mgldL after a protein meal. Amino acids share anabolically and catabolically in the formation of some organic compounds as follows. 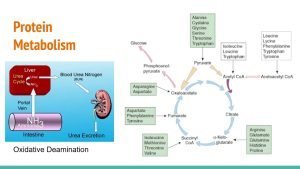 There is no storage (depot) for protein, but there is a certain percentage of protein that undergoes a constant process of breakdown and resynthesis i.e. turnover. This is a normal process and is an essential feature of what is called “nitrogen balance”.

Its enzymes are termed transaminases, It transfers the amino group from an amino acid to a -keto acid, All the amino acids participate in the reaction of transamination except (threonine) and lysine) Vitamin Be is required as a coenzyme. Most transaminases require a -keto glutarate and glutamate as one of the reacting pairs. Transaminases are cytosolic and mitochondrial enzymes. It is a freely reversible process.

The most important transaminases are:

a) Aspartate transaminase (AST) or (GOT).

Aspartate transaminase catalyzes the transfer of an amino group from aspartate, It is an enzyme normally found in liver cells and to a lesser extent in cardiac muscles In the serum, it is considered a non-functioning enzyme as its level varies from 5-40 IU/L. Its increase in serum indicates either liver cell damage as in (viral hepatitis or muscle damage as in myocardial infarction

b) Alanine transaminase (ALT) or (GPT)

Alanine transaminase catalyzes the transfer of an amino group from alanine, This enzyme is normally found in liver cells, It is a non-functional serum enzyme, i.e. it is not normally found in plasma and does not perform any function in plasma, Its level in serum varies between 5 and 45 IU/L, Its increase indicates liver cell damage as in viral hepatitis.

It is catalyzed by:

Molecular oxygen will react with reduced flavin giving H2O2 that is decomposed by catalase enzyme to H20 and oxygen. D-amino acid oxidase uses FAD as a coenzyme which is of limited natural occurrence in mammals and of high activity, whereas L-amino acid oxidase uses FMN as a coenzyme which is of natural occurrence in mammals, but of low activity. It properly functions in the deamination of lysine.

The reaction is both mitochondrial and cytoplasmic, occurs mainly in the liver and kidney, ATP and GTP are allosteric inhibitors while ADP and GDP activate the enzyme, It is a reversible reaction that could function in:

The α-amino group of serine and threonine (amino acids containing the hydroxyl group) can be directly converted to NH3 without the removal of hydrogen (without oxidation). This reaction is catalyzed by serine and threonine dehydratase enzymes which need pyriodoxal phosphate as a coenzyme.

It is a transamination followed by oxidative deamination. The net conversion of the α-amino group to ammonia requires the action of glutamate transaminase and L-glutamate dehydrogenase.