The normal pH of arterial plasma = 7.4 ± 0.02, the pH of venous plasma and of interstitial fluids= 7.38 ± 0.02 because of the extra quantities of carbon dioxide that form carbonic acid in these fluids, Acidosis is present when arterial pH falls below 7.38 and alkalosis when the arterial pH rises above 7.42.

Alterations in the structural conformations and charges of protein enzymes will obviously affect their activities, with resulting alterations in the functions of body tissues, The absorption, and efficacy of drugs administered by the physician may also be affected by the pH.

Extreme changes in the hydrogen ion concentration of the body can result in loss of organ system function and structural integrity; under acute conditions, arterial pH above approximately 7.80 or below 6.9 is not compatible with life, Control of pH is necessary because of the marked effects of pH changes on protein conformation, enzymatic reactions, and central nervous system function. 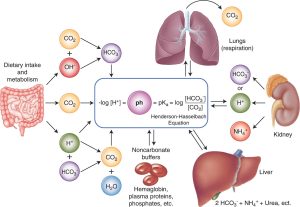 The major threats to the pH of the body fluids are acids formed in metabolic processes, These metabolic acids can be divided into three categories.

CO₂, a major end product in the oxidation of carbohydrates, fats, and amino acids, can be regarded as an acid because of its ability to react with water to form carbonic acid (H2 CO3) which in turn can dissociate to form H+ and HCO3:

Lactic acid, acetoacetic acid, and B-OH-butyric acid are formed during the metabolism of carbohydrates and fats. Normally, these acids are further oxidized to CO₂ and H₂O and therefore do not directly affect the pH of the body fluids. However, in certain abnormal circumstances, these organic acids may accumulate causing acidosis.

Defense against changes in H+ concentration

The buffer systems can act within a fraction of a second, The respiratory system takes 1-12 minutes to act, The kidneys though the most powerful require several hours to several days to readjust the H+ concentration.

From this equation, it can be seen that the strong hydrochloric acid is converted into very weak carbonic acid, Therefore, the HCI lowers the pH of the solution only slightly. On the other hand, if a strong base, such as sodium hydroxide, is added to the same bicarbonate buffer solution, the following reaction takes place:

The net result is the change of the strong base NaOH for the very weak base NaHCO3, Fortunately, this buffer is present in all the body fluids, both extracellular and intracellular, and it plays an important role in maintaining normal acid-base balance.

The phosphate buffer system is also effective in buffering the tubular fluid in the kidneys because:

The lungs regulate the pH by regulating the partial pressure of CO₂ in arterial blood. When the blood carbon dioxide concentration increases, the PCO₂ in both the interstitial fluid of the medulla and the cerebrospinal fluid also increases, The CO₂ immediately reacts with water to form carbonic acid, and carbonic acid dissociates into H+ ions and HCO3−.

The decrease in arterial pH that occurs independently of an increase of arterial PCO₂ stimulates the chemoreceptors in the carotid bodies. However, a decrease in PCO₂ and H+ concentration will decrease ventilation, Respiratory regulation of the pH is effective but almost never complete. Respiratory control returns the hydrogen ion concentration 50-70% to normal.

The kidneys regulate the blood pH by secretion of hydrogen ions and by regulating the concentration of HCO3− in plasma.

The epithelial cells of the proximal, distal tubules and collecting ducts all secrete hydrogen ions into the tubular fluid.

The kidneys regulate the plasma HCO3− by two mechanisms:

Reabsorption of the filtered bicarbonate

The kidneys generate HCO3− to replace the HCO3− lost in buffering the various strong acids formed in the body. About 100 mmol of H+ is added to the body fluids each day from the fixed acids produced during metabolism. The body’s buffer systems, particularly the bicarbonate buffer, provide the most immediate defense against this H+. For example, sulphuric acid produced during the metabolism of Sulphur containing amino acids is buffered by HCO3−.

CO₂ formed in this reaction is eliminated by the lungs. The net result of the reaction is the loss of two HCO3 ions from the body, which must be replaced by the kidneys.

Ammonia (NH3) is a highly effective buffer for secreted H+, NH3 is synthesized and its concentration in the epithelial cells increases, it diffuses out of the cells, Although it can diffuse into either the tubular lumen or the peritubular capillaries, its diffusion into the lumen (I.e. NH+ secretion) is favored because the secreted NH3 immediately reacts with previously secreted H+ to form NH4−.

Ammonium ion, due to its electrical charge, combines with a chloride ion forming ammonium chloride which is very weakly acidic, Sodium-ion is exchanged with hydrogen and is absorbed to the blood as a new sodium bicarbonate, From this reaction 2 NH3 molecules are formed and 2 new HCO3− are generated and enter the blood.

Sufficient NH3 is therefore secreted to react with virtually all the secreted H+ that cannot be buffered by the low capacity phosphate buffer system, allowing the 50-100 mmol of excess H+ that must be excreted per day to be excreted with a minimum fall in the tubular fluid pH. The formation of NH3 in the epithelial cells increases in acidosis and decreases in alkalosis.

Sodium-ion is reabsorbed with the generated bicarbonate into the blood. Thus, for each hydrogen ion combined with phosphate, one molecule of new sodium bicarbonate is added to the blood. In a normal man, the amount of phosphate delivered to the distal nephron allows only 12-40 mmol of H+ to be excreted as Na2HPO4 each day. However, the amount of available phosphate remains relatively constant even in acidotic conditions.

Urinary pH ranged from 4.5-8; pH 4.5 is the limiting pH, which is the minimal pH of urine below which no H+ secretion can occur.