The large intestine reabsorbs the water and mineral ions such as sodium and chloride, It can form and temporary store faeces, It maintains over 500 species of bacteria, It includes the colon, rectum, and anus, long tube that continues from the small intestine as food nears the end of its journey through your digestive system. It turns food waste into a stool and passes it from the body when you poop.

The Small and Large intestine:

the large intestine shows 3 features that are absent in the small intestine. 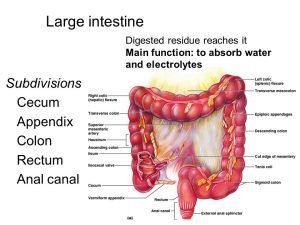 It is a mobile blind sac at the beginning of the large intestine.

Position: It occupies the right iliac fossa and is completely covered with the peritoneum.

Communications of the caecum

It is a worm-like tube, about 10 cm long, that opens by its base into a posteromedial aspect of the caecum below the terminal ileum. It has a mesentery known as mesoappendix which is a triangular peritoneal fold, containing the appendicular artery in its free border.

Positions of the Appendix

Blood supply of the appendix

Surface anatomy of the base of the appendix

(McBurney’s point): It is represented by a point at the junction between the lateral 1/3 and medial 2/3 of a line drawn from the anterior superior Iliac spine to the umbilicus.

It begins as a continuation of the cecum and ends just below the liver, where it continues with the transverse colon at the right colic (hepatic) flexure. The peritoneal covering is covered by the peritoneum anteriorly and on each side.

Venous drainage: It drains into veins corresponding to the arterial supply.

It runs from the right colic (hepatic) flexure across the abdomen to the left colic (splenic) flexure, It is completely covered with peritoneum which forms transverse mesocolon and it is freely mobile.

The transverse colon is suspended from the posterior abdominal wall by its transverse mesocolon which is attached to the anterior border of the pancreas.

Contents of the transverse mesocolon

Venous drainage: It drains into the veins corresponding to the arterial supply.

It runs from the left colic (splenic) flexure and descends till the pelvic brim to continue as the sigmoid (pelvic) colon. Peritoneal coverings are covered by the peritoneum anteriorly and on each side.

The left colic flexure is higher than the right flexure and attached to the diaphragm by a peritoneal fold called phrenico-colic ligament which prevents vertical descent of the spleen into the left iliac fossa in case of splenomegaly.

The pelvic colon begins at the left side of the pelvic brim, It ends at the 3rd sacral piece where the rectum begins, It describes an S-shaped course, and it is completely covered with peritoneum and suspended by the sigmoid mesocolon.

Venous drainage: It drains its venous blood into the veins corresponding to the arterial supply.

Sigmoid mesocolon: is a peritoneal fold that is attached to the posterior pelvic wall by an inverted V-shaped root.

Contents of the sigmoid mesocolon

It begins at the 3rd sacral piece as a continuation of the sigmoid colon, It follows the concavity of the sacrum & coccyx (sacral flexure). It ends at the recto-anal junction, about 1 inch in front and below the tip of the coccyx by bending posteriorly (perineal flexure). Its lower part is dilated and is called the “ampulla of the rectum”.

Relations of the rectum

Blood supply of the rectum

Termination: It ends at the anus.