The gallbladder is part of your digestive system, It is a small, pear-shaped organ located under your liver that stores and releases bile, the liver produces bile that helps digest fats in the food you eat. It is located in the upper right part of your abdomen (belly), Bile helps your digestive system break down fats, it is a mixture of cholesterol, bilirubin, and bile salts.

It is a hollow, pear-shaped organ attached to the lower surface of the liver, The histological organization of the gallbladder is adapted to its function of storage/concentration of bile and its release when needed into the duodenum, The wall of the gallbladder consists of:

Highly folded particularly when the gallbladder is empty. It is lined by simple columnar epithelium with apical microvilli adapted for salt and water absorption. The lamina propria is vascular and rich in lymphocytes and plasma cells.

It is relatively a thin layer. It is formed of bundles of smooth muscle fibers oriented in several directions and separated by fibro-elastic connective tissue.

Adventitia or Serosa: according to anatomical surface. 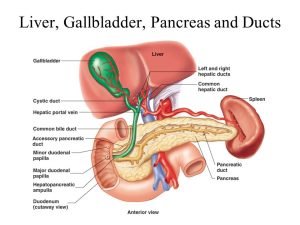 Histological structure of the exocrine pancreas

The pancreas is classified as a mixed gland; composed of both endocrine (pancreatic islets of Langerhans) and exocrine parenchyma.

Histological organization of the pancreas

Thin connective tissue capsule and thin septa that divide the pancreas into small lobules and carry with them the vascular and nervous supply. Network of reticular fibers that support the pancreatic parenchyma.

Il- The endocrine parenchyma of the pancreas.

IIl- The exocrine parenchyma of the pancreas

It is a compound tubuloalveolar (tubuloacinar) gland secreting digestive enzymes.

A. The pancreatic acini:

B. The pancreatic duct system

Physiology of the Liver

The liver is the largest gland of the body.

Functions of the liver

I. Digestive function: formation and secretion of bile

The functional unit of the liver is the hepatic lobule.

The volume of bile is about 500 ml/day, The bile pigments, bilirubin, and biliverdin, are responsible for the golden yellow color of bile. In the gall bladder bile is acidified by the reabsorption of its NaHCO3 content, The acidic medium prevents the precipitation of calcium and gall stone formation.

The specific gravity of gall bladder bile is 1050 while that of liver bile is 1008. Some of the constituents of bile are reabsorbed in the intestine and secreted again by the liver (enterohepatic circulation).

The main constituents of bile are: