The stomach stores and digests the food and liquid one consumes during meals, It produces hydrochloric acid and enzymes to help digest food and other foreign objects like bacteria, This acidic environment of the stomach kills the unwanted microorganisms, The stomach muscles contract at regular intervals to churn the food ingested and thus helps in digestion.

Constituents of the gastric juice

It is a proteolytic enzyme which is active in a highly acid medium (optimum pH = 2.0). Above a pH of about 5, it has little proteolytic activity and soon becomes completely inactivated. Therefore HCI secretion is equally as necessary as pepsin secretion for protein digestion in the stomach.

Pepsin converts proteins into acid metaproteins, proteoses, and peptones: no amino acids are formed. Pepsinogen is activated by HCI to pepsin. Any minute amounts of pepsin formed can activate the rest of the pepsinogen (autoactivation).

It is a lipolytic enzyme with weak activity. It acts optimally at a pH of about 5 so has a negligible effect on the adult stomach. It may act in infants, where the pH of gastric secretion is about 5.5, or when the gastric contents are well buffered. 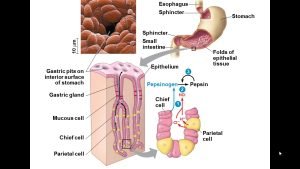 It is present in calves and many other young animals, but probably not present in humans. It acts on milk caseinogen transforming it into soluble casein, which forms with calcium a caseinate salt (milk clot).

It is secreted from the pyloric glands, cardiac glands, and mucous neck cells of the gastric glands. In addition, the surface of the stomach mucosa secretes large quantities of a far more viscid and alkaline mucus that coats the mucosa with a mucous gel layer. Mucin provides a major shell of protection for the stomach wall and contributes to the lubrication of food transport and the neutralization of considerable amounts of HCI.

It is a glycoprotein necessary for the absorption of cyanocobalamin (vit. B12) from the ileum. It prevents pernicious anaemia.

The cephalic influences are vagally mediated responses, occurring even before food enters the stomach, Neurogenic signals that cause the cephalic phase of gastric secretion originate in the cerebral cortex and in the appetite centers of the amygdala and hypothalamus, They are transmitted through the dorsal motor nuclei of the vagi and thence through the vagus nerves to the stomach.

This phase of secretion normally accounts for about 20 percent of the gastric secretion associated with eating a meal, Pepsin is secreted in higher proportion than in gastric juice elicited in other ways, Vagal stimulation also causes the release of gastrin hormone from the antral part of the gastric mucosa, This hormone then acts on the gastric glands, giving an additional flow of highly acidic gastric juice.

Thus, vagal stimulation excites stomach secretion both directly by stimulation of the gastric glands and indirectly through the gastrin mechanism, The nervous mechanism is brought about via 2 types of reflex action, conditioned and unconditioned reflexes.

There is no food in the mouth cavity or the stomach; these reflexes become established early in life. They are brought about by:

Food is swallowed to fall from an oesophageal fistula (opening to the outside) and so does not enter the stomach. Gastric juice is collected from an empty stomach. This type of secretion is purely nervous in origin. Vagotomy or cholinergic blockers as atropine block this unconditioned reflex and stop this type of secretion.

Through gastric and intestinal phases.

In this phase, gastric secretion occurs while the food is in the stomach itself and in contact with the gastric mucosa, The gastric phase is due to the release of gastrin hormone, which is a polypeptide released by the antral part of the gastric mucosa (gastrin cells or G cells) in response to:

Mechanical stimulation of the gastric mucosa by distension, or chemical stimulation by secretagogues, elicit gastrin release by discharging impulses from the stomach wall to the cell bodies of the local nerve plexuses, which in turn transmit efferent impulses to the G cells, causing them to secrete gastrin.

The neurotransmitter (from vagal fibers) at the G cells seems to be bombesin (=gastrin-releasing peptide = GRP) and not acetylcholine, Gastrin goes to the blood and is carried to oxyntic glands in the body of the stomach and peptic cells via their arterial blood supply, Any factor which blocks this reflex stops the release of gastrin.

When the products of gastric digestion enter the duodenum, they stimulate the secretion of intestinal gastrin from the duodenal mucosa in response to distension or chemical stimuli (the same as in the gastric phase). Intestinal glands in the fundus and body of the stomach secrete a strongly acidic juice rich in enzymes. Also, other hormones are secreted to inhibit gastric secretion and emptying e.g. secretin, CCK, neurotensin, GIP,…

Secretin is secreted by the duodenal mucosa in response to the acidification of the bulb. In other words, the stimulus for its secretion is the evacuation of an acidic chyme before adequate mixing and buffering of the acid.

Cholecystokinin is secreted by duodenal mucosa in response to contact with fat. It is clear, from the above, that the distal parts of the gut have some command on the stomach. In other words, the stomach is controlled both from above (the brain) and from below (the small intestine).

Several types of movements occur in the stomach. These include:

These are maintained mild to moderate contractions that occur mainly in the fundus but to a lesser extent in the body. The severity of the tone is inversely related to the volume of the stomach contents. Their main function is to maintain constant intragastric pressure.

These are strong contractions that occur in the body of the stomach when it is empty. They are exacerbated by peristaltic waves. They may fuse together → tetanic contractions for 1-3 minutes forming hunger pains.

With food intake, there is a reflex relaxation of the fundus and body of the stomach to receive the coming bolus of food. This reflex is initiated by:

During the inter-digestive period, any food left in the stomach is removed by the MMC, which is a peristaltic wave that begins within the esophagus and travels through the entire GIT. It occurs every 60-90 min during the inter-digestive period. The hormone motilin, which is released from endocrine cells within the epithelium of the small intestine, increases the strength of MMC.