The juxtaglomerular apparatus is located at the vascular pole of each glomerulus where the afferent and efferent arterioles come in close contact with the initial part of the distal convoluted tubule. It is made up of tubular and vascular elements of the nephron which interact to control the systemic blood pressure and the rate of glomerular filtration (and hence the rate of urine formation).

They are modified cells of the distal tubule that come in close contact with the afferent arteriole at the vascular pole of the glomerulus of its own nephron. 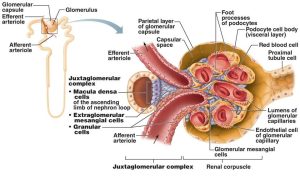 Histological features: They differ from the ordinary cells of the distal tubule in the following:

These are groups of cells occupying the angle between the afferent and efferent arterioles.

Histological features: They are small cells with a lace-like network of cytoplasmic processes that contact the macula densa, the juxtaglomerular, and the intraglomerular mesangial cells by gap junctions for intercellular signaling.

Histological structure of the collecting ducts

Many medullary collecting ducts join to form larger straight papillary ducts of Bellini, which open in the area cribrosa at the apex of the renal papilla. The lining cells are less eosinophilic with distinct intercellular boundaries. Two types of lining cells can be distinguished:

The mechanism of autoregulation is uncertain. It is definitely intrinsic to the kidneys since autoregulation can be demonstrated in transplanted, denervated kidneys, There are two hypotheses (theories) trying to explain autoregulation of the glomerular filtration rate and renal blood flow.

The afferent arterioles have the inherent ability to respond to changes in vessel circumference by contracting or relaxing – (a myogenic response), The myogenic hypothesis attributes the increase in renal vascular resistance that accompanies an increase in systemic arterial pressure to contraction of the afferent arteriolar smooth muscle in response to stretch.

The juxtaglomerular hypothesis mechanism involves a feedback loop in which a change in GFR leads to alteration in the concentration of NaCl in tubular fluid, which is sensed by the macula densa of the juxtaglomerular apparatus and converted into signals that affect the afferent arteriolar resistance and thus the GFR.

A) In case of hypertension

B) In case of hypotension

The renal blood flow is relatively constant between the limits of 70 and 160 mmHg mean arterial pressure. It is mainly the afferent arteriolar feedback mechanism that causes this renal blood flow autoregulation.

If the mean arterial pressure is increased:

If the mean arterial pressure is decreased:

When the arterial pressure remains low for more than 10 to 20 minutes: Blood flow autoregulation disappears. Instead, the efferent arteriolar vasoconstrictor mechanism becomes more potent which decreases the renal blood flow. This allows the glomerular filtration rate to remain almost constant, but the marked decrease in blood flow through the kidney helps to return the arterial pressure back toward normal.