The peritoneal cavity is divided into two sacs: 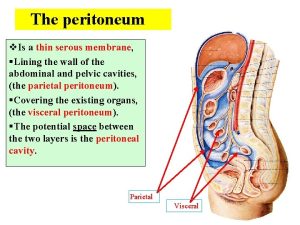 Peritoneal reflections in the sagittal section

If the stomach is reflected away from the liver, a peritoneum fold (lesser omentum) is found connecting the liver at porta hepatis with the stomach. This is formed by two: layers. The two layers of the peritoneum separate to enclose the stomach. Then, they come close together at the greater curvature of the stomach to form a big peritoneal fold (greater omentum). The two layers of the greater omentum descend down and then reflected again upwards to be attached to the anterior border of the pancreas.

Peritoneal reflections in the horizontal section

The peritoneum covers the inner aspect of the anterior abdominal wall and reflects in a horizontal pattern to form gastrosplenic, lienorenal, lesser omentum, and falciform ligaments of the liver.

Boundaries of the epiploic foramen

Relations of the lesser sac

Anterior wall: It is formed by:

Upper border: It is formed by reflection of the peritoneum between the liver and the diaphragm.