The adrenal gland lies at the upper pole and adjacent part of the medial border of the kidney. The right one is triangular while the left one is semilunar in shape.

Each gland is supplied by three arteries: 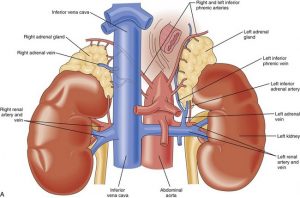 Each gland consists of 2 parts:

It forms the central part of the suprarenal gland. As it develops from the ectodermal neural crest, it contains two populations of parenchymal cells:

By LM: These are called chromaffin cells due to the affinity of catecholamines granules (epinephrine and nor-epinephrine) in their cytoplasm to react with chromium salts and stain deep brown (chromaffin reaction). They are arranged in rounded groups or short cords intimately related to the medullary blood sinusoidal capillaries. The chromaffin cells are large ovoid cells with large spherical nuclei and pale basophilic cytoplasm.

By EM: The cytoplasm contains some profiles of rER, prominent Golgi complex, and secretory granules containing the catecholamines.

The medulla has a dual blood supply, arterial from the medullary arterioles and venous from the cortical sinusoids draining the cortex, Cortical glucocorticoids reaching the medulla are essential for the production of epinephrine by medullary chromaffin cells.

Catecholamines are secreted mainly in emergency conditions to support the actions of the sympathetic nervous system, They enable the body to perform extra work, These actions are produced through exerting the following effects:-

Catecholamines secretion is low in basal states but is markedly increased during emergencies as a part of the diffuse sympathetic discharge, They are essential for preparing the body to withstand the stresses as in muscular exercise, haemorrhage, hypoglycemia, and exposure to cold.

Effect of Deficiency of catecholamines