Cellular respiration , Structure of ATP and types of fermentation

Cellular respiration is the process by which the living organism’s cells extract the energy stored in the chemical bonds of food molecules , especially sugars ( glucose ) that are manufactured by the plants or eaten by animals , then this energy is stored in the form of ATP  molecules to be used in performing the different activities .

Glucose ( as well as other carbohydrates ) is considered as a form of stored energy , also it is a form by which the energy transfers from one cell to another and from one living organism to another .

In order to understand how ATP performs its function , we have to study its structure , The molecule is built up of three sub-units which are :

ATP molecules are considered as the universal currency of energy in the cell , as any energy required by a cell needs ATP which changes into ADP ( adenosine diphosphate ) , an amount of energy ( which is about 7-12 kcal/mole ) is released . 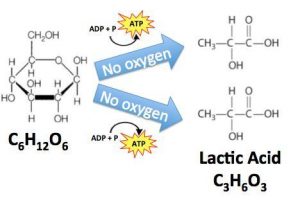 It is the principal route for obtaining the energy in the majority of living organisms in the presence of oxygen , The oxidation of one mole of glucose produces energy of 38ATP , this can be illustrated by the following equation .

The most important co-enzymes are :

NAD+ which is reduced into NADH

FAD which is reduced into FADH2

The glycolysis of glucose occurs as the following : One molecule of glucose is broken down into two molecules of pyruvic acid ( 3-carbon ) through a group of reactions .

These reactions are accompanied by ( for each molecule of glucose ) :

Reduction of two molecules of the co-enzymes NAD+

Production of two molecules of ATP in the cytosole of the cell .

The equation of reaction :

Two molecules of ATP which are not enough to perform all the vital activities in the living organisms , Therefore , in the presence of oxygen , the pyruvic acid passes into the mitochondria to produce more energy , this takes place in two stages which are Krebs cycle and Electron transport chain .

The importance of glycolysis : The production of two molecules of ATP , The obtaining of pyruvic acid which is used in both aerobic and anaerobic respiration .

The first scientist who described this cycle was Sir Hans Krebs in 1937 , He won Noble prize in 1953 , It occurs inside the mitochondria , Before the entrance into Krebs cycle , the following reaction occurs :

The acetyl groups resulting from the breaking down of fat molecules or protein molecules can combine with the co-A to join Krebs cycle .

Krebs cycle takes place in many stages , which are :

During one cycle , all these compounds are produced :

Krebs cycle is repeated twice ( one for each molecule of acetyl group ) , Krebs cycle does not need oxygen , because all the electrons and protons are removed during the oxidation of carbon atoms and received by NAD+and FAD molecules .

The importance of Krebs cycle :

The oxidation of carbon atoms through a group of reactions by removing the electrons through the intermediate compounds which are received by the co-enzymes ( NAD+and FAD ) and then these co-enzymes transfer them to the cytochromes to release the energy and form ATP molecules .

The terminal stage of aerobic respiration that starts at the end of Krebs cycle , It occurs inside the mitochondria , Electron transport chain occurs in many stages as the following :

Hydrogen and high-energy electrons carried by NAD+and FAD are transported over certain sequences of co-enzymes called cytochromes ( electron carriers ) that are present inside the inner membrane of mitochondria .

Oxidative phosphorylation is the process by which ATP is formed from ADP and a phosphate group by using the energy released during the passage of electrons ( that are carried on cytochromes ) from a high-energy level to a low-energy level .

Two electrons combine with 2H+ and one oxygen atom to form a water molecule , So , oxygen is considered as the last receptor in the electron transport chain .

The importance of electron transport chain : Releasing the energy stored in NADH and FADH2 through the passage of electrons over a sequence of cytochromes and using produced energy to form ATP from ADP .

In aerobic respiration , each molecule of glucose produces 38ATP :

Anaerobic respiration  ( Fermentation ) is a process by which the living organism obtains energy from the food molecule ( glucose ) in the absence or lack of oxygen by the help of special enzymes and this produces a small quantity of energy ( 2ATP molecules ) .

As in animal muscular cells and bacteria , In the muscle fibers , when the muscles exert vigorous efforts or exercises , they consume most of the oxygen in their cells and tend to convert the pyruvic acid into lactic acid through its reduction by its combing with the electrons on NADH , This is known as a muscular fatigue .

In yeast and some plant cells : Pyruvic acid is reduced into ethyl alcohol and carbon dioxide , This is used in the industry of some products .

Seeds of angiosperms have the power to respire anaerobically , if they are kept under the anaerobic conditions .