Lipoproteins made up of droplets of fats surrounded by a single layer of phospholipid molecules, Phospholipids are molecules of fats that are attached to the phosphorus-containing group, Lipoproteins transport hydrophobic lipid molecules in water, such as in the blood plasma or other extracellular fluids,  lipoproteins such as many enzymes, transporters, structural proteins, antigens, adhesins, and toxins, Examples include plasma lipoprotein particles (HDL, LDL, IDL, VLDL, and chylomicrons).

Plasma lipids are usually measured after 12 hours of fasting. The total plasma lipide ranges from 400-700 mg/dl (mean value 470 mg/dl). Also include small amounts of other steroids and fat-soluble vitamins

All lipids in plasma are transported in the form of lipoproteins. Plasma lipoproteins have the central core formed of non-polar lipids (triacylglycerols and esterified cholesterol). The outer layer contains the more polar lipids (phospholipids and non-esterified cholesterol), and proteins (apoproteins). Apoproteins are either peripheral (can be transferred) or integral (cannot be transferred). 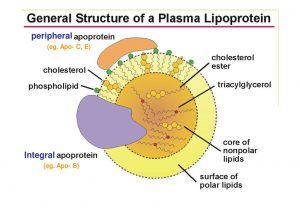 I- Synthesis of nascent chylomicrons:

After entering the bloodstream, the chylomicron particles transfer apo-A to HDL and acquire apo-C from HDL.

I- Synthesis of nascent VLDL:

They are released into the blood by the liver. They receive apo-C11, E2, and cholesterol esters from HDL in plasma.

VLDL particles become smaller and are now known as VLDL remnants or LDL.

All LDL arises normally from VLDL metabolism. LDL particles are rich in cholesterol esters, which are probably derived from HDL. Apo-B100 is the only apolipoprotein in LDL particles.

LDL particles bind to specific apo-B100 receptors in both extrahepatic tissues (30%) and the liver (70%). The receptor LDL complex is internalized by endocytosis. These vesicles fuse with lysosomes where cholesterol esters are hydrolyzed by lysosomal acid lipase to free cholesterol that performs its function according to the tissue.

Cholesterol is used for.

The cholesterol content of the cells that have an active LDL pathway is regulated in 2 ways:

LDL is an important source of cholesterol to extrahepatic tissues. High levels of LDL- cholesterol increase the risk of atherosclerosis.

So HDL is important for the removal of cholesterol from the tissues to the liver, and high levels of HDL protect against atherosclerosis.

High-density lipoproteins and the enzyme lecithin-cholesterol acyl transferase (LCAT) play important roles in the transport and elimination of cholesterol from the body. LCAT is a plasma enzyme produced mainly by the liver. The LCAT-HDL system functions to protect cells especially their plasma membranes from the damaging effects of excessive amounts of free cholesterol.

Cholesterol ester generated in LCAT reaction diffuse into the core of HDL particle where it is then transported from the tissues and plasma to the liver; which is the only organ capable of metabolizing and excreting cholesterol. Thus by this mechanism, reverse transport of cholesterol, LCAT acting on HDL provides a vehicle for transporting cholesterol from peripheral tissues to the liver.

Plasma lipoproteins are separated into different fractions by two methods, electrophoresis, and ultracentrifugation.

They are separated according to their mobility in an electric field. It depends on the charge and molecular weights of various particles. According to this method, plasma lipoproteins can be separated into:

It means accumulation of lipid (mainly triacylglycerols) in the liver, leading to fibrotic changes and impaired liver functions.

I- Causes related to lipid:

A) Causes due to excessive mobilization of fat to the liver:

B) Causes due to decreased mobilization of fat from the liver: