However, the sex of the embryo is determined genetically at the time of fertilization, the gonads do not acquire male or female morphological characteristics until the seventh week of development, Gonads appear initially as a pair of longitudinal ridges, the genital or gonadal ridges, They are formed by the proliferation of the epithelium and condensation of underlying mesenchyme.

Germ cells do not appear in the genital ridges until the sixth week of development, Before this time the sex gland is called the indifferent gonad”. 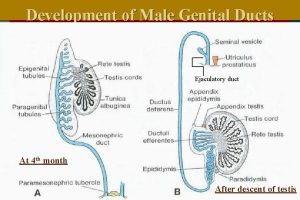 Remain solid until puberty when they acquire a lumen. Their walls are composed of 2 kinds of cell:

Descent of the testis

Factors controlling the descent of the lower pole of the testis

Development of the ovary

Descent of the ovary

Ectopic ovary: the ovary may be found in the inguinal canal or in the labia majora.

The mesonephros and mesonephric ducts are derived from intermediate mesoderm from upper thoracic to upper lumbar (L3) segments (refer to the urinary system development).

In males, the mesonephric tubules will persist as a few excretory tubules, the epigenital tubules which establish contact with cords of the rete testis and finally form the efferent ductules of the testis, Excretory tubules along the caudal pole of the testis, the paragenital tubules, do not join the cords of the rete testis, Their vestiges are collectively known as the paradidymis, In females, the mesonephric tubules degenerate except epoophron and paroophron.

Development of the uterus

It developed from the paramesonepheric ducts. It is divided into 3 parts:

Development of the vagina

Fate of Mullerian duct in male

A)- Anomalies due to failure of fusion of the 2 paramesonephric ducts:

B)- Anomalies due to complete or partial atresia of paramesonephric ducts:

This stage is common in male and female, The proliferation of mesenchyme on each side of the cloacal membrane form cloacal folds, Three structures are then formed:

A. External genitalia in male:

Cause: Androgens secreted by fetal testis.

The three structures around the cloacal membrane will give the following:

B. External genitalia in female

Cause: Estrogens stimulate the development of the external genitalia of female. The three structures around the cloacal membrane will give the following: