Fats are the main source of energy in the human body, they are only mobilized during prolonged periods of starvation from adipose tissue by lipolysis, in the human liver, fatty acids are not transformed into blood glucose. If starvation is very prolonged, proteins are also used as an energy source. Glycogen can be stored in animals, fungi & bacteria, The polysaccharide is the main form of glucose in the body. The major dietary source of galactose is lactose obtained from milk & milk products.

This is the key enzyme for glycogen synthesis. It catalyzes the transfer of glucose units from UDP-G to glycogen primer (an already existing chain of glucose molecules) so that C1 of activated glucose of UDP-G is linked to C4 of the terminal glucose unit in the glucogen primer (growing glycogen) by α 1, 4 glucosidic linkages. This process can be repeated and produces an elongation of the branches up to a minimum of 11 glucose residues. This is immature glycogen.

It transfers parts of the elongated chain (minimum length 6 glucose residues) from one branch to be linked to the nearest chain by α 1, 6 glycosidic linkages forming a new branching point. The new branches are elongated by glycogen synthase and the process is repeated. 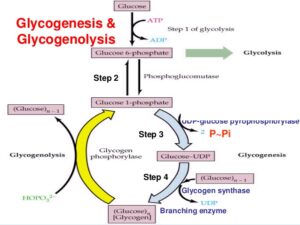 Covalent modification by hormones: Glycogen synthase is the key enzyme of glycogenesis. It is present in 2 forms:

It is an intracellular breakdown of glycogen to form G-1-P which is converted to G-6-P. Its main site is the cytosol of the liver and muscles. It is catalyzed by glycogen phosphorylase and two other enzymes.

The step catalyzed by phosphorylase is the rate-limiting in glycogenolysis. Active glycogen phosphorylase in the presence of inorganic phosphates acts on the α 1, 4-glucosidic linkages of the outermost (terminal branches) of glycogen molecules, (between C1 of the terminal residue and C4 of the adjacent one) leading to the formation of successive molecules of G-1-P, removing one glucose unit at a time. The action of the enzyme stops when there are four glucose residues on either side of a 1 → 6 branch.

α 1,4 → α 1, 4 glucan transferase. It transfers a trisaccharide unit from one branch to the other, exposing the α 1, 6 branch point.

It catalyzes the removal of the last glucose residue at the branching point by adding H2O producing free glucose, leaving a chain for further phosphorolysis by the phosphorylase enzyme. G-1-P formed by phosphorolytic cleavage of glycogen is converted into G-6-P by phosphoglucomutase.

In liver and kidneys, G-6-P is converted into free glucose + Pi by G-6-phosphatase. So, the liver can release glucose into the blood to maintain a relatively constant level of blood glucose. In the muscles, G-6-P is retained and cannot be different out of cells due to the absence of G-6-phosphatase, so, muscles can utilize it to produce ATP for itself.

Covalent modification by hormones: Norepinephrine and epinephrine (in liver and muscle) or glucagon in the liver only activate glycogen phosphorylase, while insulin inhibits it.

The major dietary source of galactose is lactose obtained from milk and milk products. The digestion of lactose occurs by lactase enzyme (β-galactosidase) of the intestinal mucosal cell membrane. Some galactose can also be obtained by lysosomal degradation of complex CHO such as glycoproteins and glycolipids, which are important membrane components as well as from the turnover of the body’s own cells. Like fructose, entry of galactose into cells is not insulin-dependent.

Galactosemia is an inherited disease due to deficiency of the galactose 1-phosphate uridyl transferase (most commonly) also due to inherited defects in galactokinase, or 4-epimerase, and characterized by mental retardation, diarrhea, and cataract.