Neuro-Muscular Junction (Motor End-plate) is a specialized nerve ending (effector, motor) by which a motor nerve fiber ends in a skeletal muscle. Skeletal muscles are innervated by large myelinated nerve fibers, originating from the motor neurons of the cranial nerves and anterior horn cells of the spinal cord.

The site of the junction between the nerve fiber and the skeletal muscle fiber is formed of:

Axon terminal: near the sarcolemma, the myelinated motor nerve fiber loses its myelin sheath and divides into several branches forming axon terminals, which terminate in contact with the sarcolemma by the epilemmal ending. Thus, there is no cytoplasmic continuity between the nerve terminal and muscle fiber. The axon terminal contains a large number of mitochondria and synaptic vesicles containing the neurotransmitter, acetylcholine.

Synaptic cleft is the space between the axon terminal and the sarcolemma of the skeletal muscle fiber. In this cleft, a high concentration of acetylcholine esterase enzyme is found.

Sole plasm is the sarcolemma under the postsynaptic sarcolemma. It is characterized by being slightly elevated with many nuclei. It appears granular as it contains numerous mitochondria, abundant glycogen granules, and ribosomes. Myofibrils are absent in the sole plasm.

Muscles are machines for converting stored chemical energy into mechanical energy (work) and heat. Muscles constitute 50% of the total body weight; contraction is the main function of the muscles. The individual muscle fibers are the ” building blocks” of the muscular system, skeletal muscles end in tendons, and the muscle fibers are paralleled so that the force of contraction of the units is additive. There are approximately 640 skeletal muscles in the human body.

This type of muscle fibers is characterized by:

This type of muscle fibers is characterized by:

In the human body, individual skeletal muscles tend to have a mixture of the two twitch types. The third type of muscle fibers (intermediate type; fast oxidative) are present. These fibers share the characteristics with each of the other two types i.e. they have high ATPase activity like the fast (anaerobic) fibers and high oxidative capacity like the slow (aerobic fibers).

Skeletal muscles are nerve-operated and under the control of the CNS, they contract only when their motor nerve is intact, connecting them to the CNS. Motor nerve fibers reach the skeletal muscle from the anterior horn cells in the grey matter of the spinal cord. Degeneration of muscle with complete loss of function or paralysis occurs if its nerve supply is cut.

Motor unit (The all or none rule)

Changes occurring in a muscle as a result of activity

When skeletal muscle is stimulated either directly or indirectly through its motor nerve supply, the following changes occur:

Electrical changes in a skeletal muscle

They are the same as in the nerve with some differences: 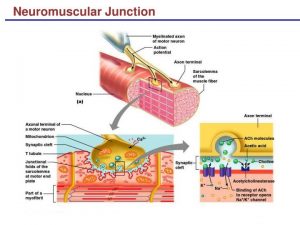 The end plate potential is a local unpropagated potential when it reaches a certain value called threshold potential it fires the potential on both sides of the motor end plate, along the sarcolemmal membrane, leading to muscular contraction.

Acetylcholine is rapidly destroyed (after one millisecond) from its release, by the acetyl cholinesterase enzyme in the cleft itself. This short time is sufficient for acetylcholine to excite the muscle fibers. The rapid hydrolysis of acetylcholine prevents re-excitation of the muscle fiber after recovery from the previous action potential.