Protozoa are a vast collection of unicellular microorganisms of different sizes and forms, They may be free-living or parasitic, Although they are single-celled, yet, they are capable of performing all functions of life.

Vital functions of the protozoa are performed by the protoplasm which is differentiated into cytoplasm and nucleoplasm, The cytoplasm consists of the ectoplasm and the endoplasm.

The ectoplasm is the outer layer of the cytoplasm and is concerned mainly with movement, Endoplasm is concerned with the digestion and reproduction of the protozoon, It contains the nucleus, food vacuoles, and stored food material in the form of glycogen, It may also contain contractile vacuoles for regulation of osmotic pressure as in ciliates and free-living amoebae. 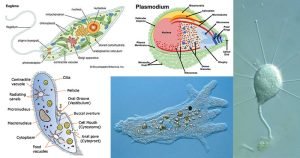 Ingestion of food differs according to the type of protozoa, Some protozoa engulf solid material with the aid of the pseudopodia (amoebae) or a clit-like mouth opening (ciliates), and others feed by diffusion of already prepared food through the cell membrane.

Excretion of metabolic waste products can occur by diffusion through the ectoplasm (flagellates), or by the aid of contractile vacuoles (ciliates), Sometimes metabolic by-products are deposited as pigment granules in the endoplasm.

Secretion of various substances can be carried out by the protozoa, Some protozoa can secrete histolytic enzymes to aid in their penetration of tissues, and other protozoa secrete a cyst wall as a means of protection and a means of transmission to a new host.

Reproduction may be sexual or asexual, although, in some protozoa both may take place, Asexual reproduction occurs by binary (or multiple) fission, Sexual reproduction involves the fusion of male and female gametes to form the zygote, Movement is carried out with the aid of pseudopodia as in amoebae, flagella as in flagellates or cilia as in ciliates.

Protozoa are divided according to their organs of locomotion into three phyla: Sarcomastigophora (amoebae and flagellates), Ciliophora (ciliates), and Apicomplexa (coccidia).

These are the protozoa that move with the aid of pseudopodia or flagella and include two subphyla Sarcodina and Mastigophora.

Members of this subphylum have the following characters:

Members of this subphylum (e.g. Entamoeba) are transmitted directly, and do not require an arthropod vector, Man can be infected by the ingestion of mature cysts in his food or drink.

Members of this subphylum have the following characters:

Members of this subphylum either inhabit the small intestine (e.g. Giardia lamblia) or the genito-urinary tract (e.g. Trichomonas vaginalis), and both are transmitted directly, or they are present in blood and tissues and require an arthropod vector for their transmission (e.g. Leishmania species).

In intestinal flagellates, man acquires the infection by ingestion of the cysts in food or drink. On the other hand, blood and tissue flagellates possess an indirect life cycle that requires an arthropod vector that injects the infective stage.

Members of this phylum possess the following characteristics:

Members of this phylum have the following characteristics:

They have no definite organ of locomotion.

They have an apical complex which can be seen by the electron-microscope, certain organelles which facilitate the entry of the parasite into the host cells.

They possess a complicated life cycle involving sexual and asexual reproduction. These cycles can occur in the same host or in two different hosts.

They are either transmitted directly (e.g. Toxoplasma gondii or require an arthropod vector for their transmission (e.g. Plasmodium species causing malaria.

Apicomplexa possesses a complex life cycle involving asexual multiplication in the vertebrate host (e.g., man), and sexual reproduction that occurs either in another vertebrate host  (cats case of Toxoplasma gondii) or in an arthropod (mosquito) as in the case of Plasmodium.