The ovaries produce eggs and hormones for menstruation and pregnancy, They are found on either side of the uterus, The major hormones secreted by the ovaries are oestrogen and progesterone, they are important in the menstrual cycle.

Ovarian hormones are estrogens and progesterone.

A. In nonpregnant females: Estrogen is secreted from the Graafian follicle and corpus luteum of the ovary, Progesterone is secreted during the latter half of each ovarian cycle by the corpus luteum. Minute amounts of female sex hormones are secreted by the adrenal cortex.

B. In pregnancy: Very large amounts of progesterone and estrogen are secreted by the placenta, Estrogens and progesterone are transported in the blood bound mainly with plasma albumin, The binding is so loose that they are rapidly released to the target tissue. 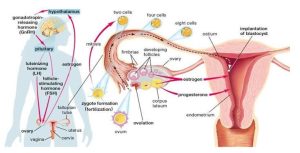 Functions of estrogen & progesterone in pregnancy

After puberty, the quantity of estrogens increases. At this time, the female sexual organs change from those of a child to those of an adult. Estrogen causes cellular growth and proliferation of tissues of sex organs and other tissues related to reproduction.

The external genitalia enlarges, with deposition of fat in the mons pubis and labia majora and with enlargement of the labia minora.

3. Effect on the breasts

Development of the stromal tissues of the breasts and nipple. Growth of the duct system. Estrogens initiate the growth of the milk-producing apparatus. They increase the deposition of fats in the breasts giving it the external appearance of the mature female breast. It also causes pigmentation of the areola.

4. Effect on the skeleton

Estrogens cause increased osteoblastic activity. Therefore, at puberty, the growth rate becomes rapid for several years. They cause changes in body configurations. The woman has narrow shoulders and a broad hip, They cause early uniting of the epiphyses with the shafts of the long bones, After menopause, no estrogens are secreted, As a result, Osteoblastic activity decreases, Bone matrix decreases, and the deposition of bone calcium and phosphate decrease

Estrogens cause a slight increase in total body protein (positive nitrogen balance). It has an anabolic effect due to its growth-promoting effect on the sexual organs, the bones and a few other tissues of the body.

6. Effect on metabolism and fat deposition

Estrogens increase the metabolic rate slightly. They also cause the deposition of fat in the subcutaneous tissues, buttocks, and thighs giving characteristics of the feminine figure.

7. Effect on the skin

Estrogens cause the skin to be soft and smooth and more vascular than normal.

Estrogen causes sodium and water retention by the kidney tubules.

1. Effect on the uterus

Progesterone promotes secretory changes in the uterine endometrium during the latter half of the female sexual cycle, thus preparing the uterus for implantation of the fertilized ovum, Progesterone decreases the frequency of uterine contractions, thereby helping to prevent expulsion of the implanted ovum, and it makes cervical mucus thicker.

2. Effect on the fallopian tubes

It promotes secretory changes in the mucosal lining of the fallopian tubes. These secretions are for the nutrition of the fertilized ovum.

It promotes the development of the lobules and alveoli of the breasts, causing the alveolar cells to proliferate and enlarge to become secretory in nature.

Progesterone exerts a mild catabolic effect on the body’s protein. This effect is probably significant during pregnancy, when proteins must be mobilized for use by the fetus.

At the age of 45-50 years, the sexual cycles usually become irregular and ovulation fails to occur during many of the cycles, The cycles cease and the female sex hormones diminish rapidly, The cause of menopause is “burning out of the ovaries FSH and LH are produced in large and continuous quantities because there is no ovarian hormone to inhibit them.

The loss of the estrogens often causes marked physiological changes in the function of the body, including hot flashes characterized by extreme flushing of the skin, psychic sensations of dyspnoea, irritability, fatigue, anxiety, and occasionally various psychotic states.

Abnormalities of Secretion by the Ovaries

Before puberty: It results from poorly formed ovaries, lack of ovaries or genetically abnormal ovaries. In this condition, the manifestations are: The usual secondary sexual characteristics do not appear and the sexual organs remain infantile, Prolonged growth of the long bones: because the epiphyses do not unite with the shafts of these bones.

After puberty: When the ovaries of a fully developed woman are removed the following manifestations appear, The sexual organs regress to some extent so that the uterus becomes almost infantile in size, The vagina becomes smaller and the vaginal epithelium becomes thin and easily damaged, The breasts atrophy and become pendulous and the pubic hair becomes thinner, These same changes occur hi women after menopause.

Hypersecretion of the Ovaries

It is caused by tumors in the ovaries, These tumors secrete large quantities of estrogens, which exert the usual estrogenic effects, including hypertrophy of the uterine endometrium and irregular bleeding from this endometrium, Bleeding is often the first indication that such a tumor exists.

In pregnancy, the placenta secretes the following hormones.

Coincidently with the development of the trophoblast cells from the early dividing ovum, the hormone is secreted into the fluids of the mother. The secretion of this hormone can first be measured 8 days after ovulation. Then the rate of secretion rises rapidly to reach a maximum of approximately 8 weeks after ovulation.

The functions of human chorionic gonadotropin are:

Human chorionic gonadotropin has very much the same molecular structure and function as the luteinizing hormone.

Functions of estrogen in pregnancy

Functions of progesterone in pregnancy

A new placental hormone which is a protein secreted about the fifth week of pregnancy and increases progressively. Its functions are:

It is secreted by the corpus luteum of pregnancy and by decidual cells. The hormone. relaxes pelvic bones and ligaments, inhibits myometrial contractions and softens the cervix.

1. Anterior pituitary gland: Maternal growth hormone secretion in response to various stimuli decreases during pregnancy, probably because its anabolic functions are carried out by human chorionic somatomammotropin and/or placental growth hormone variant. Maternal LH and FSH secretion also is suppressed by the high levels of estrogen, progesterone, and inhibin from the corpus luteum and later the placenta.

2. Adrenal cortex: Glucocorticoid secretion is increased throughout pregnancy. The enhanced glucocorticoid activity may contribute to maternal adipose tissue gain and to mammary gland development. Aldosterone secretion increases significantly throughout pregnancy, this contributes to the positive sodium balance that is needed to maintain a high total maternal plasma volume and to build the extracellular fluid of the fetus.

4. Insulin secretion, in response to meals increases after the third month of secretion This secretion reaches its peak during the last trimester coinciding with the peak of plasma human somatomammotropin. Because maternal sensitivity to insulin is greatly diminished during this period, insulin hypersecretion may be compensatory.

6. Calcium absorption from the diet increases during pregnancy and offsets the continuing drain created by the growing fetal skeleton. This increase in calcium absorption is accounted for by increased maternal levels of the active metabolite of Vitamin D.