The female external genitalia are collectively referred to as the vulva, they include:

The principal organs of the human female reproductive tract consist of the ovaries, the fallopian tubes, the uterus and the vagina. 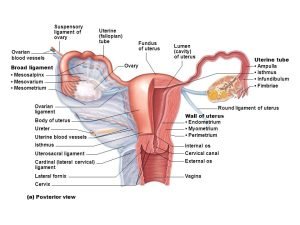 Definition: It is a pear-shaped hollow muscular organ, that lies between the rectum and urinary bladder inside the pelvic cavity.

Dimensions: its size is 1,2,3 inches (thickness, width, and length respectively).

Parts of the uterus

Position of the uterus

The normal position is anteflexion & anteversion (AVF position). Anteflexed (the forward angle between the long axis of the body of the uterus and that of the cervix = an obtuse angle, 170 degrees). Anteverted (the forward angle between long axis of the vagina and that of the cervix= 90 degrees). If the uterus is directed backwards, it is called retroverted, retroflexed (RVF).

Body of uterus and its relations

It is the lower part of the uterus and projects into the vagina through the upper part of its anterior wall of the vagina and divides it into:

External os in nulliparous is small and rounded but it is in the form of a transverse slit in the female who has borne babies, and has anterior and posterior lips.

Peritoneal covering of the uterus

The peritoneum reflects in front of middle 1/3 of the rectum to form a recto-uterine pouch (Douglas pouch). Laterally the peritoneum forms folds that extend from the uterus to the side walls of the pelvis. These folds are known as broad ligaments and contain the uterine tubes in their upper free borders.

Ligaments of the uterus

the first 3 are attached to the cervix:

Parts of the broad ligament

Contents of the broad ligament

Weakness of the uterine supports leads to downward descend (telescoping) of the uterus through the vagina (uterine prolapse).

Arterial supply of the uterus

Uterine artery: arises from the anterior division of the internal iliac artery. It has a tortuous course. It runs medially on the floor of the pelvis, in the root of the broad ligament. 2 cm lateral to the cervix; it crosses over the ureter to ascend along the side of the uterus.

Below the uterine tube, it turns laterally to anastomose with the ovarian artery. It supplies the uterus, medial part of the uterine tube, upper vagina, and ureter. It gives vaginal, cervical ureteric, tubal, and anastomotic branches. The uterine artery gives the following branches:

Histological structure of the uterus

The uterine wall is formed of three layers, the endometrium, the myometrium and the perimetrium corresponding to the mucosa, the musculosa and the serosa.

The endometrium is functionally divided into:

It is the thickest layer of the uterine wall, composed of bundles of smooth muscle fibers separated by connective tissue. Four interwoven layers can be distinguished:

It is the outer layer of the uterine wall. It is formed of connective tissue covered at certain areas by mesothelial cells according to the uterine anatomical position.

Histological structure of the uterine cervix

The cervix is the lower cylindrical part of the uterus. Its histological structure is differentiated from the rest of the uterus by the following:

The upper part of the cervical canal is lined by endocervical mucosa, formed of:

1. The lower part, which bulges into the vagina, is lined by exocervical mucosa, formed of non-keratinized stratified squamous epithelium, continuous with that of the vagina.

2. The cervical mucosa undergoes little change in thickness during the menstrual cycle and is not sloughed during the period of menstruation.

3. The amount and properties of the mucus secreted by the cervical glands vary during the menstrual cycle under the influence of the ovarian hormones:

4. The bulk of the cervix is made up of dense, fibrous connective tissue with relatively little smooth muscle.