Pituitary gland is called the master gland or the main gland because it secretes hormones that regulate the activities of most of other endocrine glands. The pituitary gland plays an important role in delivery and breast feeding processes because it secretes the facilitating hormone during delivery and the mammary glands activating hormone to activate the mammary glands to secrete milk during breast feeding process.

Hormones in the human body

The nervous system organizes and coordinates both the activities and functions of the organs of living organisms, But, scientists through their experiments and researches proved that there is another form of organizing and coordinating of these activities and functions, This form is performed by chemical substances secreted by special cells in the body, These secretions are known as Hormones.

The hormone is a chemical substance (or a chemical message) that controls and organizes most of the vital activities and functions in the bodies of living organisms. Hormones are secreted in the body by some organs called “Endocrine glands or Ductless glands. Endocrine glands are ductless glands that secrete their hormones directly into the blood without passing through ducts. 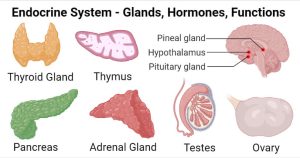 The function of Endocrine glands

Most important endocrine glands in the human body

Endocrine glands secrete more than 50 hormones in the human body in limited quantities. On the occurrence of a disorder in the action of one of the endocrine glands, this affects the percentage of its secretion (by increasing or decreasing than the normal level) causing disease symptoms which are known as hormone disorder. Hormone disorder is the increase or decrease in the secretion of one of the hormones, when the endocrine gland that secretes it doesn’t act properly.

The pituitary gland is a small gland in the size of a pea seed, It consists of two lobes. It is located below the brain. It secretes hormones that regulate the activities of most of the other endocrine glands. So, it is called the “master gland” or the main gland”. Each lobe of the two lobes of the pituitary gland secretes a group of different hormones.

Some hormones of the pituitary gland

Growth hormone controls the speed of growth rate of body muscles, bones, and other organs. So, It determines the height that the person will reach when he becomes fully grown.

The thyroid gland consists of two lobes, linked together by a small part. It is located in the front surface of the neck on both sides of the trachea. It secretes two hormones which are:

On the occurrence of a disorder in the secretion of the thyroxin hormone from the thyroid gland, this will lead to goiter disease which has 2 shapes as follows:

Two adrenal glands are located adhering to the top of the kidney. They secrete the adrenalin hormone. Adrenalin hormone stimulates the body’s organs to respond to emergencies like fear, anger, and emotion.

When a man is exposed to fear and horror, The pituitary gland responds by secretion of adrenal glands activating hormone, so these adrenal glands secrete adrenalin hormone which stimulates the body’s organs to respond to emergencies.

The pancreas gland is located between the stomach and the small intestine. It secretes two hormones which are Insulin hormone and Glucagon hormone.

Insulin hormone reduces the level of glucose sugar in the blood. That’s occurred by stimulating:

Glucagon hormone raises the level of glucose sugar in the blood. That’s occurred by stimulating: Liver cells to convert the stored glycogen into glucose sugar that releases into the bloodstream to be available to body cells.

Features of disorder in the secretion of insulin hormone

Diabetes disease is treated with insulin hormone because it reduces the percentage of glucose sugar in the blood.

In this way, they were able to produce and collect large amounts of the human growth hormone by great numbers of bacteria (in which this gene was inserted) then, this hormone was refined and tested. In 1985, the researches conducted on this hormone proved its validity for human use to treat children with limited growth.

Steps of synthesis of growth hormone by genetic engineering