The respiratory system allows oxygen in the air to be taken into the body, and it enables the body to get rid of carbon dioxide in the air breathed out, It consists of all the organs involved in breathing, These include the nose, pharynx, larynx, trachea, bronchi, and lungs, Human respiratory system suffers from common respiratory symptoms include breathlessness, cough, and chest pain.

The main goal of respiration is to provide oxygen to the tissues and to remove carbon dioxide. Respiration includes two processes:

External respiration can be divided into four major steps: 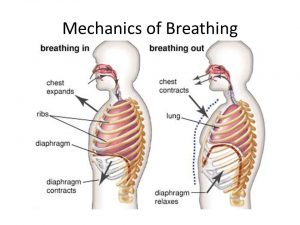 Structures of the respiratory system

Respiratory centers: located in the brain stem and connected to the respiratory muscles by respiratory nerve fibers.

Respiratory muscles: Muscles of inspiration, and Muscles of expiration.

Airways: The tracheobronchial tree, an arrangement of branching tubes begins at the larynx, The largest airway is the trachea designated as (generation 0), The airway tree progressively bifurcates down to the alveolar sacs (generation 23), Each generation is progressively smaller in both diameter and length, The larger conducting airways (generations 0 through 16) transport air between the outside and the gas-exchanging regions of the lungs, The smaller respiratory airways (generations 17 through 23) not only conduct air but also permit gas diffusion which increases in significance closer to the alveoli.

The first 16 generations (conducting zone) are made up of the trachea, bronchi, and bronchioles, In succeeding generations, the number of bronchioles increases and the diameter diminishes.

Functions of the conducting zone

1. Conduction of air into the respiratory zone

The conducting one of the respiratory systems consists of the mouth, nose, pharynx, trachea, primary bronchi, and all successive branching of the bronchioles up to and including the terminal bronchioles.

When the inspired air reaches the respiratory zone, its temperature is 37° C (body temperature) regardless of the temperature. This function is needed to maintain a constant internal body temperature. The mucosa of the nose, mouth, and pharynx has a large surface area and a rich blood supply, This adds heat to cold air or removes heat from hot air.

Inspired air entering the respiratory system is rarely 100% saturated with water, Air is humidified to full saturation in moving from outside ambient conditions where it is dry to within the airways. This function is needed to protect delicate lung tissue from desiccation.

Mucus secreted by cells of the conducting zone serves to trap small particles in the inspired air and thereby perform a filtration function. This mucus is moved along at a rate of 1-2 cms per minute by cilia projecting from the tops of epithelial cells that line the conducting zone.
There are about 300 cilia per cell that beat in a coordinated fashion to move the mucus toward the pharynx where it can either be swallowed or expectorated. This system is termed the mucociliary escalator. The cilial beat may become ineffective under certain conditions such as anesthesia, smoking or prolonged dry air inspiration.
As a result of this filtration function, particles larger than about 6 μm do not normally enter the respiratory zone of the lungs. The alveoli themselves are normally kept clean by the action of macrophages that reside within them.

Irritant receptors located in the epithelium of airways mediate the protective responses of cough and bronchospasm. These receptors are stimulated by Irritants (smoke, allergens).