Hormones of the Anterior Pituitary are:

Release of the anterior pituitary hormones is regulated by hypothalamic releasing and inhibiting hormones. They are synthesized in the hypothalamic nuclei and released from the axonal ending passing into the hypophyseal portal system to affect the cells of the pars distalis by inhibiting or stimulating the release of its hormones. 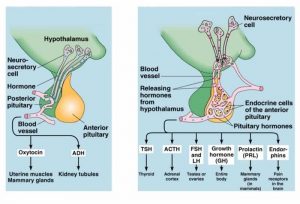 The hypothalamic releasing and inhibitory hormones are:

It is a small protein molecule formed of multiple amino acids. It causes growth of all tissues of the body that are capable of growing including bone, muscles, and viscera. It promotes both increased size of the cell and mitosis with the development of a large number of cells.

Actions of the Growth Hormone

I) Effect on cartilage and bone:

Growth hormone acts indirectly on cartilage and bone by causing mainly the liver and other tissue to form several proteins called Somatomedins (A,B&C), they are polypeptide growth factors, which are called insulin-like growth factors.

Somatomedins stimulates the proliferation of chondrocytes and the appearance of osteoblasts. They are required for deposition of Chondroitin sulphate and collagen, both of which are necessary for cartilage growth, Bone growth is secondary to the formation of cartilage. In the long bone growth occur by increase the thickness of the epiphyseal endplates.

As the epiphyseal plates widen, it adds more matrix at the end of long bones leading to an increase the length of the body. After epiphyseal closure, bone length doesn’t increase but thickening can occur through periosteal growth.

Growth H. has a lipolytic effect, it increases the utilization of fat leading to the release of fatty acids from adipose tissue to the body fluids. In addition, in the tissue, it enhances the conversion of fatty acids to acetyl-Co A to give energy.