Glucocorticoids (cortisol) are steroids in nature formed in the middle layer of the adrenal cortex. At least 95% of the glucocorticoid activity of the adrenocortical secretions results from the secretion of cortisol, and hydrocortisone. Cortisol combines with a globulin called transcortin. 94% is normally transported to the bound form and 6% is free.

The activated hormone receptor complex migrates to the nucleus and binds to specific sequences of DNA called hormone response elements (HRE). This interaction increases or decreases the transcription (synthesis of mRNA) of the target genes. This mRNA acts as a template for the synthesis of specific proteins or enzymes which cause metabolic changes.

Steroid hormone receptors have several functional domains, one site binds the hormone, another for translocation of the receptor from the cytoplasm to the nucleus, a third binds to a specific DNA region called the hormone response element (HRE) and a fourth activates the specific gene.

Functions of the glucocorticoid 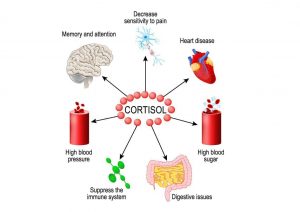 1. Effects of cortisol on carbohydrate metabolism

2. Effects of cortisol on protein metabolism

3. Effects of cortisol on fat metabolism

4. Effect of cortisol on the circulatory system

It is essential to maintain normal circulatory functions and myocardial contractility. cortisol is necessary for the vasoconstrictive action of norepinephrine and other vasoconstrictives. Cortisol decreases the permeability of vascular endothelium therefore it maintains the blood volume.

5. Effect of cortisol on skeletal muscle

It is essential to the maintenance of muscular activity and even to life itself during severe exercise, Insufficiency causes rapid muscular fatigue and excess leads to muscular atrophy due to protein catabolism.

6. Effect of cortisol on the nervous system

The brain is extremely sensitive to cortisol and variation in its concentration produces changes in certain sensations as well as higher functions such as concentration, memory, and intellectual performance.

7. Effect of cortisol on blood cells and on immunity

Cortisol increases the production of red blood cells. It increases leukocytes. Cortisol decreases the number of eosinophils, basophils, monocytes, and lymphocytes in the blood. Administration of large doses of cortisol causes significant atrophy of all the lymphoid tissues throughout the body, which in turn decreases the output of both T cells & antibodies, As a result, the level of immunity for almost all foreign invaders of the body is decreased.

9. Anti-inflammatory and anti-allergic effects of cortisol