The pharynx is a musculo-membranous tube present posterior to the nose, mouth, and larynx. It extends from the base of the skull to the sixth cervical vertebra, where it joins the oesophagus, The wall of the pharynx is composed of:

Muscles of the pharynx

Action: Elevation of the larynx and the pharynx during swallowing.

Action: It assists in the elevation of the pharynx.

It has been discussed with the palate. 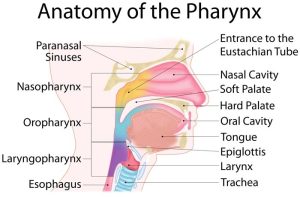 The interior of the pharynx

The pharynx is divided into three parts:

It extends from the base of the skull to the upper surface of the soft palate (at the level of C 1. It contains the following structures:

It extends from the lower surface of the soft palate to the upper border of the epiglottis, It communicates anteriorly with the oral cavity through an opening called the oropharyngeal isthmus made by the palatoglossal arch on each side (each arch is made by palatoglossus muscle covered by mucous membrane).

Arterial supply of the tonsil

Nerve supply of the tonsils:

The glossopharyngeal nerve supplies the middle ear so the pain of tonsillitis refers to the ear.

It extends from the upper border of the epiglottis to the level of the cricoid cartilage (Level of C. 6) where it continues as the oesophagus, Its upper part lies behind the inlet of the larynx.

The Piriform fossa is a depression on each side of the inlet of the larynx, It has the following boundaries:

The nerve supply of the mucous membrane of the piriform fossa is the internal laryngeal nerve.

Gaps of the pharynx

1. A gap laterally between the superior and middle constrictors, It gives passage to the following:

2. A gap laterally between the middle and inferior constrictors, This gap is closed by the thyrohyoid membrane, The structures passing through this gap are:

3. A gap at the lower border of the inferior constrictor, It is pierced by:

Nerve supply of the pharynx

Pharynx is supplied mainly by the pharyngeal plexus which is composed of:

Through the pharyngeal plexus (by cranial part of the accessory nerve) except the stylopharyngeas muscle which is supplied by the glossopharyngeal nerve.

Arterial supply of the pharynx

Venous drainage of the pharynx

It is drained by the pharyngeal plexus of veins which drains into the internal jugular vein.

Lymphatic drainage of the pharynx

The esophagus is a long muscular tube about 10 inches long that extends through the neck, thorax, and abdomen. It begins as a lower continuation of the pharynx and ends at the cardiac end of the stomach.

1. Cervical part: It begins opposite the lower border of the cricoid cartilage, at the level of the 6th cervical vertebra. The cervical part of the esophagus lies between the trachea anteriorly and the vertebral column and prevertebral muscles posteriorly, The recurrent laryngeal nerve lies in the groove between the trachea and esophagus on each side.

The left recurrent laryngeal nerve lies in the groove between the trachea and esophagus on the left side, The azygos vein lies close to the right side of the esophagus while the thoracic duct lies close to its left side, In the posterior mediastinum, the esophagus is surrounded by esophageal plexus of nerves (derived from both vagi).

3. Abdominal part: It is the shortest of all parts, It enters the abdomen through an opening in the right crus of the diaphragm at the level of T10, After a course of about 1/2 inch (1.25 cm), it enters the stomach on its right side, It is covered on its anterior and lateral surfaces by the peritoneum, The left and right vagi lie on its anterior and posterior surfaces, respectively.